Verwandte Artikel zu The House of Binding Thorns (Dominion of the Fallen...

De Bodard, Aliette The House of Binding Thorns (Dominion of the Fallen 2)

The House of Binding Thorns (Dominion of the Fallen 2) 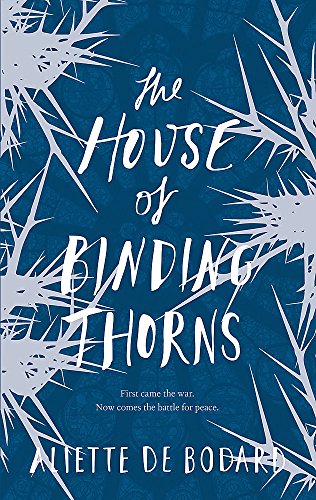 an intriguing mystery, elegantly written... with carefully crafted characters both with layers and depth, De Bodard reflects the best and worst of human nature in her novel (The Guardian)

One of the most influential voice in fantasy today. (STARBURST)

Truly beautifully balanced: between new and old, birth and death, beauty and ugliness, inside and outside, beginning and, yes, ending. It walks the line, and walks it fine. (TOR.COM)

I strongly urge you to get House of Shattered Wings: it offers something a little different; a superb blend of intrigue, mystery and magic and urban fantasy; it's brilliantly written; and the story is gripping. I can't wait for the sequel. Very highly recommended. (CIVILIAN READER)

Reading this novel felt like a very intimate experience, the characters and landscape are so well developed with such detail that one feels as if they are walking alongside them as the story unfolds... Ambience abounds in this novel. (Geek Syndicate)

There's so much going on here: social commentary, myths and fairy tales that often feel under-represented in genre fiction, a gripping adventure and an affecting love story. The author has gone from strength to strength. (SciFiNow)

I have rarely read such a brilliantly executed piece of work... This is a must read for everyone who enjoys complex fantasies with well-developed characters and sophisticated worldbuilding. (INTERZONE)

Aliette de Bodard has made a name for herself imagining futures and alternate histories that showcase non-Western cultural landscapes and characters...this is smart and nuanced storytelling (SFX)

If you like fantasy which is intelligent and definitely non-formulaic, then I would absolutely recommend this book. (BSFG)

The multi-award-winning author of The House of Shattered Wings continues her Dominion of the Fallen saga as Paris endures the aftermath of a devastating arcane war . . .

As the city rebuilds from the onslaught of sorcery that nearly destroyed it, the great Houses of Paris, ruled by fallen angels, still contest one another for control over the capital.

House Silverspires was once the most powerful, but just as it sought to rise again, an ancient evil brought it low. Phillippe, an immortal who escaped the carnage, has a singular goal - to resurrect someone he lost. But the cost of such magic might be more than he can bear.

In House Hawthorn, Madeleine the alchemist has had her addiction to angel essence savagely broken. Struggling to live on, she is forced on a perilous diplomatic mission to the underwater dragon kingdom - and finds herself in the midst of intrigues that have already caused one previous emissary to mysteriously disappear . . .

As the Houses seek a peace more devastating than war, those caught between new fears and old hatreds must find strength - or fall prey to a magic that seeks to bind all to its will.

'A superb blend of intrigue, mystery and magic and urban fantasy; it's brilliantly written; and the story is gripping' Civilian Reader

1. The House of Binding Thorns

Buchbeschreibung Gollancz, 2017. Paperback. Zustand: Good. Ex library copy with usual stamps/stickers Good condition is defined as: a copy that has been read but remains in clean condition. All of the pages are intact and the cover is intact and the spine may show signs of wear. The book may have minor markings which are not specifically mentioned. Most items will be dispatched the same or the next working day. Bestandsnummer des Verk‰ufers wbb0012742151

2. The House of Binding Thorns

Buchbeschreibung Gollancz, 2017. Paperback. Zustand: Very Good. Very Good: a copy that has been read, but is in excellent condition. Pages are intact and not marred by notes or highlighting. The spine remains undamaged. Most items will be dispatched the same or the next working day. Bestandsnummer des Verk‰ufers mon0012033929

3. The House of Binding Thorns (Dominion of the Fallen 2)

Buchbeschreibung Paperback. Zustand: Very Good. The book has been read, but is in excellent condition. Pages are intact and not marred by notes or highlighting. The spine remains undamaged. Bestandsnummer des Verk‰ufers GOR008627369