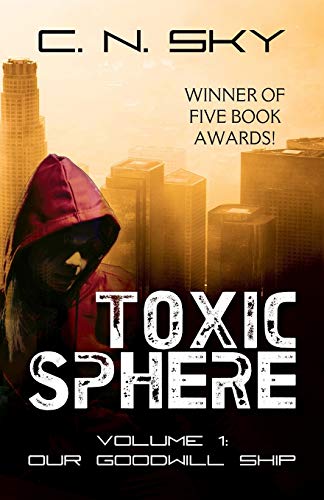 A package vanishes. A ship sets sail. A manhunt begins. The year is 1007 EE, and four great powers-Cadona, Domataland, Sohn-Sur, and Visstel-are battling for world dominance. Leeha Ritsagin is one of the seventeen billion humans caught up in the battle of the giants. She enjoys old movies, works hard, longs for a boyfriend, fears elevators, cares about the world, and is a wanted criminal. Her story begins on a drive across town, and while she worries about getting lost, the danger she faces doesn't wait for her in the slums of Cadona City. Rather, it comes inside a simple paper bag that appears in the backseat of her old car. Powerful members of the Back-to-Basics Club launch a manhunt to catch the thief who stole their package at a time when Club leaders are primed to take control of the Cadonan government, start a war against fabricated enemies, and deploy the world's most powerful weapon: Toxic Sphere. In response to growing international peril, the rising nation of Domataland dispatches its Goodwill Ship to aid a threatened ally. When news of the package's disappearance reaches the desk of Domataland's president, he instructs his intelligence chief to find the thief, hoping to use the mysterious package against his Cadonan adversaries. With Leeha's life in danger, investigative journalist Bob Fullerby begins his own search to find the young woman before her hunters do. C. N. Sky's debut novel is an ambitious saga with engaging characters, pulse-quickening action, and well-crafted suspense-a definite must-read by an up-and-coming new voice in fiction.

About the Author: C. N. Sky is a former US Army Military Intelligence officer with a degree in political science. Sky loves nature and is especially fond of flying squirrels.