Verwandte Artikel zu Tradecraft: For the Church on Mission

Tradecraft: For the Church on Mission 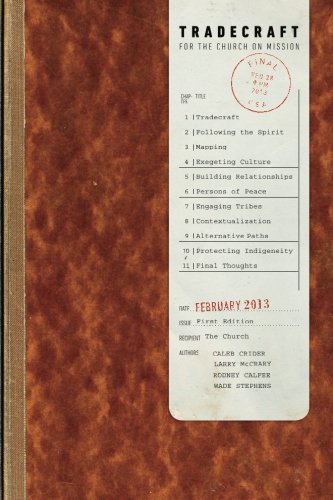 The Western Church world is abuzz with talk of being missional. Church leaders, conference speakers, and authors are weighing the merits of the attractional church movement of the past few decades, and where they find it lacking, prescribing changes in the way we need to approach our cultures with the Gospel. There has been a consensus shift among many churches, networks, and denominations to become more focused on mission. The result is a renewed interest in reaching the lost in our cities and around the world. The Church, in many places in the Western world, is in fact returning to a biblical missional focus.  Yet there is something still to be addressed in the process: the how. For centuries, God has called missionaries to cross cultures with the Gospel, and along the way, they have developed the necessary skill-sets for a cultural translation of the Good News. These skills need to be shared with the rest of the Church in order to help them as well be effective missionaries. Tradecraft for the Church on Mission does exactly that. This book, in essence, pulls back the curtain on tools once accessible only to full-time Christian workers moving overseas, and offers them to anyone anywhere who desires to live missionally.

Larry E McCrary co-founded The Upstream Collective. He has a wonderful wife who loves working with Third-Culture Kids. His children Megan and Parker have spent most of their lives in Europe.  They were involved in church planting in the States during the 90s and have been in Spain and Germany since 2001. He loves working with young churches and helping them begin to engage their community and their world. Caleb Crider co-founded the Upstream Collective in Spain in 2007. He lives in Portland, Oregon, with his wife, two children, a dog, and some chickens. He works as a communications specialist, but he is really a missionary and church planter who believes that all Christians everywhere should think and act like missionaries. Wade Stephens has lived on mission with his family for 10 years in Eastern Europe. For the past several years, he has been in the U.S. while helping churches, companies, and individuals that are seeking to live as missionaries. Working as a missionary and/or tentmaker over the years, he recognizes an opportunity for the gospel to advance through creative endeavors. Rodney Calfee was a product of the Upstream Collective before he ever considered joining the team. He joined UC as a young pastor on a trip to Taiwan, where everything he knew about church planting and missional living was stretched and challenged. He works full-time with Upstream in Birmingham, where he lives with his wife and three daughters. His hope is that other leaders would have a similar experience to his and be impassioned and equipped to lead their people to think and act like missionaries.

1. Tradecraft: For the Church on Mission

2. Tradecraft: For the Church on Mission