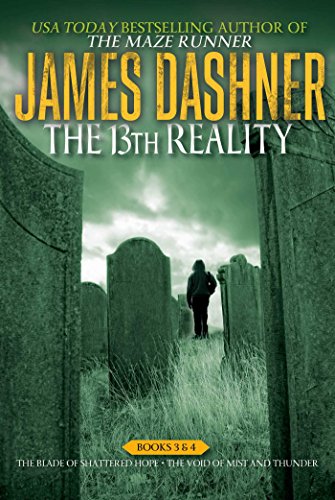 Suspense meets sacrifice in the final two adventures of The 13th Reality series by the New York Times bestselling author of The Maze Runner—now available in one exciting edition!

What if every time you made a choice that had a significant consequence, a new, alternate reality was created—the life that would’ve been? What if those new Realities were in danger? What if it were up to you to save all the realities—and in turn, the entire universe?

Atticus Higginbottom, a.k.a. Tick, was living a regular life until he learned about the 13 Realities. After the near catastrophe in the Fourth Reality, things have changed even more. Tick’s being homeschooled in the fields of science, trying to master the mysterious Chi’karda. Just as he begins to make progress, Mistress Jane reappears, hideously scarred and much more powerful. She has tapped into the universe’s darkest secret to create the Blade of Shattered Hope, and in her quest to attain a Utopian Reality for the future of mankind, she’s ready to risk billions of lives—including those of Tick’s parents and sisters—to set her plan in motion. Tick and his friends are faced with their most dangerous task yet. And they must not fail; for if they do, the entire universe could cease to exist.

Join Tick in the final two books of the acclaimed The 13th Reality series.

James Dashner was born and raised in a small town in Georgia. His love of books and writing made him dream of being an author someday, and he still can’t believe his dream has come true. He is the author of the New York Times bestselling Maze Runner series, the Infinity Ring series, and the 13th Reality series. Visit him online at JamesDashner.com.

Brandon Dorman is the illustrator of Be Glad Your Nose is on Your Face and The Wizard, both by Jack Prelutsky; and The Christmas Sweater by Glenn Beck. He received a degree in fine arts from Brigham Young University—Idaho and lives in Puyallup, Washington, with his family.

1. The 13th Reality Books 3 & 4: The Blade of Shattered Hope; The Void of Mist and Thunder Dashner James and Dorman Brandon

2. The 13th Reality Books 3 & 4: The Blade of Shattered Hope; The Void of Mist and Thunder