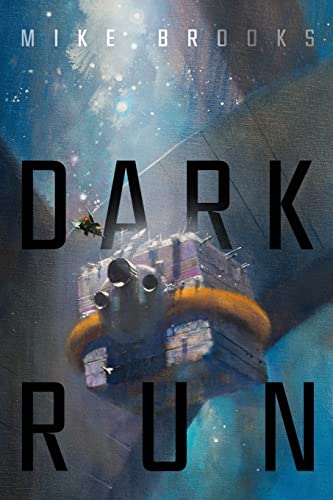 Brooks's terrific debut demonstrates that a good caper tale can take place anywhere, even in interstellar space. Capt. Ichabod Drift and the crew of the Keiko have an unusual approach to galactic law and order, one that ranks "convenience over obedience." All of them have secrets that they'd rather not reveal, but Drift's is the biggest of all: he was once known as Gabriel Drake, a notorious privateer. He thought he'd escaped his past, but now it has come calling in the form of Nicolas Kelsier, ex-minister of Extra-terrestrial Resource Acquisition for the Europan Commonwealth, and Drift's former boss. Kelsier offers him both the carrot and the stick: Drift can take Kelsier's smuggling commission and earn a handsome sum for himself and his crew--or have his past revealed to the Federation of African States and the rest of the galaxy. Even with elaborate planning, capers never run easily, and this one is no different. It will take all the skills of each of the Keiko's crew members and some "outrageously ballsy chicanery" on Drift's part if they are to escape with their lives, let alone make a profit. Fans of rip-roaring space adventures will greatly enjoy this one.--Publishers Weekly "March 7th, 2016 "

Brooks turns in an enjoyable adventure that has all of the fast action and clever dialog fans of the genre look for, with well-drawn secondary characters who also have moments to shine. Suggest this debut to enthusiasts of caper plots and stories such as Chris Wooding's Ketty Jay novels, and, of course, Firefly.--Library Journal "April 15th, 2016 "

"Dark Run is a fast paced smuggler story that delivers all the crooked and devious action you could ask for."--SFBook Reviews

"A pure scoundrel-centric tale that is worthy of the Serenity crew and will make any Firefly fan smile."--, Geek Dad

The Keiko is a ship of smugglers, soldiers of fortune, and adventurers travelling Earth’s colony planets searching for the next job. And they never talk about their past―until now. Captain Ichabod Drift is being blackmailed. He has to deliver a special cargo to Earth, and no one can know they’re there. It’s what they call a dark run...And it may be their last.

Buchbeschreibung Paperback. Zustand: New. Paperback. Shipping may be from multiple locations in the US or from the UK, depending on stock availability. 368 pages. 0.318. Bestandsnummer des Verkäufers 9781481459532