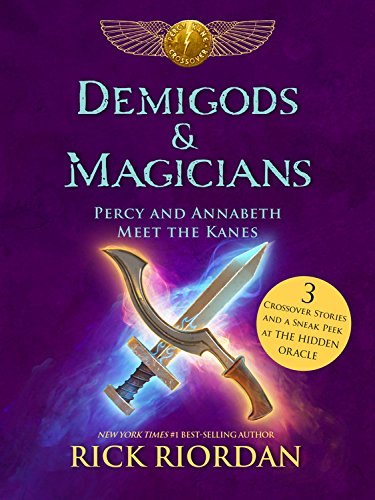 Rick Riordan, dubbed "storyteller of the gods" by Publishers Weekly, is the author of five #1 New York Times best-selling middle grade series with millions of copies sold throughout the world: Percy Jackson and the Olympians, The Heroes of Olympus, and the Trials of Apollo, based on Greek and Roman mythology; the Kane Chronicles, based on Ancient Egyptian mythology; and Magnus Chase and the Gods of Asgard, based on Norse mythology. Rick collaborated with illustrator John Rocco on two #1 New York Times best-selling collections of Greek myths for the whole family: Percy Jackson's Greek Gods and Percy Jackson's Greek Heroes. Rick is also the publisher of an imprint at Disney-Hyperion, Rick Riordan Presents, dedicated to finding other authors of highly entertaining fiction based on world cultures and mythologies. He lives in Boston, Massachusetts with his wife and two sons. Follow him on Twitter at @camphalfblood.

Magic, monsters, and mayhem abound when Percy Jackson and Annabeth Chase meet Carter and Sadie Kane for the first time. Weird creatures are appearing in unexpected places, and the demigods and magicians have to team up to take them down. As they battle with Celestial Bronze and glowing hieroglyphs, the four heroes find that they have a lot in common--and more power than they ever thought possible. But will their combined forces be enough to foil an ancient enemy who is mixing Greek and Egyptian incantations for an evil purpose? Rick Riordan wields his usual storytelling magic in this adrenaline-fueled adventure.