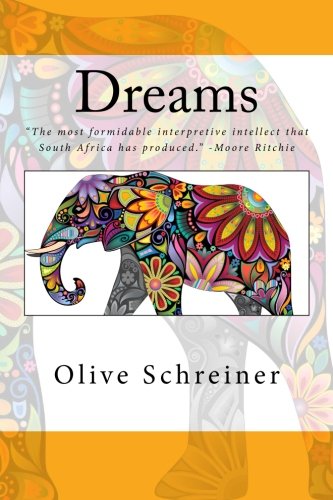 This is the second book by Schreiner, South African author and feminist, who is best remembered for her novel, ‘The Story of an African Farm.’ It contains eleven short stories based on Schreiner's dreams and life on a farm in South Africa.

“The book stands the only one of its kind. It is like seeing visions to read it; and no one can read it understandingly and not be inspired to fresh struggles to attain the true, the good, and the beautiful.” -Public Opinion

“Anyone who has read ‘The Story of an African Farm’ will need no urging to read Olive Schreiner’s ‘Dreams.’ It is a collection of allegories of life, as vividly condensed as tales by Maupassant or Coppee, but each opening up a long vista to the imagination....Miss Schreiner has thought much and deeply of the mysteries of human life before she poured out her doubts and longings in the African story, and in these dreams we may see the kernel of some of her best work.” -San Francisco Chronicle

"The most formidable interpretive intellect that South Africa has produced." -Moore Ritchie

“The book is a treasure for a lifetime....Never was there depicted a more earnest sympathy with the life that has lost its hold on good, and wandered from its true course. The spiritual significance is as great as is the intellectual grasp. The human life, the life next beyond this human life, are both sources of inspiration from which she draws.” -Sunday Budget

The feminist and socialist writer and social theorist Olive Schreiner (1855-1920) was one of the most important and radical social commentators of her day. Her published writings include novels, allegories and influential works of social theory, among them The Story of An African Farm, Undine, From Man to Man, Dreams, Dream Life and Real Life, Trooper Peter Halket of Mashonaland, The Political Situation, Closer Union, and Woman and Labour.