Verwandte Artikel zu The Distilled Shorts Collection (The Chronicles of...

Drayer Duncan, Phillip The Distilled Shorts Collection (The Chronicles of the Moonshine Wizard)

The Distilled Shorts Collection (The Chronicles of the Moonshine Wizard) 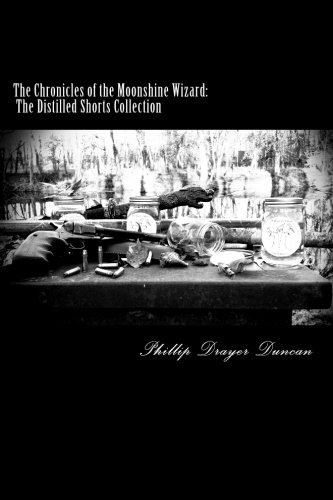 Waylon “Bert” Drake is a young wizard from the Ozarks. Wielding his wizard staff and his sarcastically witty sword, Bert’s past comes to life for the first time in print, as all six of the Moonshine Wizard prequel stories have been put together in one collection. Join Bert as he battles werewolves, vampires, dark wizards, ogres, and even garden gnomes, and forges the path that will lead him to A Fist of Thorns. This Collection includes... First Job The Ogre and The Primates A Sword Named Sharp Hunting One Like Us The Monster Beneath the Bed The Hunt for the Dark Wizard

Phillip Drayer Duncan was born in Eureka Springs, Arkansas and has spent most of his life in the Ozarks. He currently resides in Anderson, Missouri. Along with reading and writing like a madman, his passions include kayakin, canoein, fishin, shootin, video games, and pretty much anything nerd related. More than anything, his greatest passion includes spending time with his ridiculously awesome friends, his wonderful family, and his gorgeous girlfriend. Throughout the warm months, he can be spotted on the river, around a campfire, or at a concert. In the cold months, he can be found hermitting amongst a pile of books and video games. No worries, he writes throughout. His greatest dream in life is to become a Jedi, but since that hasn’t happened yet, he focuses on writing. His earliest books were written on notebooks, and acted out with action figures. He swears that if people wouldn’t think he was crazy, that he would still spend his days playing with action figures. He still feels this is the best way to write. For more information about Phillip Drayer Duncan and his writing, or to contact him... PhillipDrayerDuncan.Com Phillip Drayer Duncan on Facebook Writer_Phill on Twitter