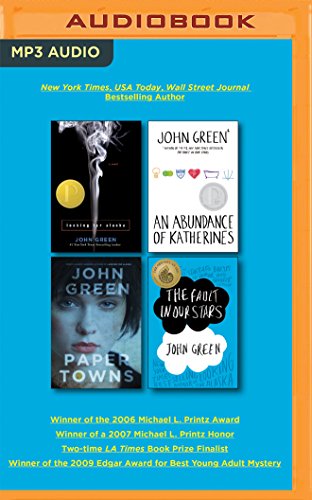 Miles Halter is fascinated by famous last words—and tired of his safe life at home. He leaves for boarding school and finds Alaska Young. Clever, funny, screwed-up, and dead sexy, Alaska will pull Miles into her labyrinth.Looking for Alaska brilliantly chronicles the indelible impact one life can have on another.

An Abundance of Katherines

When it comes to relationships, Colin Singleton’s type is girls named Katherine. And when it comes to girls named Katherine, Colin is always getting dumped. Nineteen times, to be exact. On a road trip miles from home, this anagram-happy, washed-up child prodigy has ten thousand dollars in his pocket, a bloodthirsty feral hog on his trail, and an overweight, Judge Judy-loving best friend riding shotgun. Love, friendship, and a dead Austro-Hungarian archduke add up to surprising and heart-changing conclusions in this ingeniously layered novel.

Quentin Jacobsen has spent a lifetime loving the magnificently adventurous Margo Roth Spiegelman from afar. So when she cracks open a window and climbs back into his life, he follows. After their all-nighter ends and a new day breaks, Q arrives at school to discover that Margo, always an enigma, has now become a mystery. But Q soon learns that there are clues—and they’re for him. Urged down a disconnected path, the closer he gets, the less Q sees of the girl he thought he knew.

The Fault in Our Stars

Despite the tumor-shrinking medical miracle that has bought her a few years, Hazel has never been anything but terminal, her final chapter inscribed upon diagnosis. But when a gorgeous plot twist named Augustus Waters suddenly appears at Cancer Kid Support Group, Hazel’s story is about to be completely rewritten. Insightful, bold, irreverent, and raw,The Fault in Our Stars brilliantly explores the funny, thrilling, and tragic business of being alive and in love.

John Green is an award-winning, New York Times-bestselling author whose many accolades include the Printz Medal, a Printz Honor, and the Edgar Award. He has twice been a finalist for the LA Times Book Prize. With his brother, Hank, John is one half of the Vlogbrothers, one of the most popular online video projects in the world. You can join John's two million followers on Twitter (@realjohngreen).

1. John Green Audiobook Collection on MP3-CD: Looking for Alaska, An Abundance of Katherines, Paper Towns, The Fault in Our Stars

2. John Green Audiobook Collection: Looking for Alaska / An Abundance of Katherines / Paper Towns / The Fault in Our Stars