Verwandte Artikel zu The Civil War in 1862: The Battles that Saved Both...

Charles River Editors The Civil War in 1862: The Battles that Saved Both the North and South

The Civil War in 1862: The Battles that Saved Both the North and South 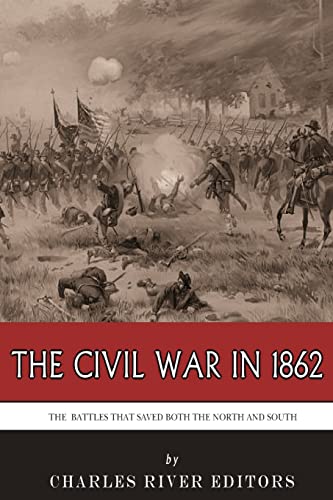 In the wake of First Bull Run, both sides were served notice that the war would be longer than either had anticipated, but the Union and Confederacy still hoped to win the war in 1862. That year, the North and South both launched offensives in the East and West in hopes of scoring a knockout blow, but ultimately the battles of that year would best be remembered for saving each side and ensuring 1863 would see more war.
After Union General Ulysses S. Grant captured Fort Henry and Fort Donelson in early 1862, Confederate General Albert Sidney Johnston, widely considered the Confederacy's best general, concentrated his forces in northern Georgia and prepared for a major offensive that culminated with the biggest battle of the war to that point, the Battle of Shiloh. On the morning of April 6, Johnston directed an all out attack on Grant's army around Shiloh Church, and though Grant's men had been encamped there, they had failed to create defensive fortifications or earthworks. They were also badly caught by surprise. With nearly 45,000 Confederates attacking, Johnston's army began to steadily push Grant's men back toward the river. The Battle of Shiloh lasted two days, and Grant's army eventually won, with nearly 24,000 combined casualties among the Union and Confederate forces. The Battle of Shiloh took place before costlier battles at places like Antietam and Gettysburg, so the extent of the casualties at Shiloh shocked the nation. Moreover, at Shiloh the casualties were viewed as needless; Grant was pilloried for allowing the Confederates to take his forces by surprise, as well as the failure to build defensive earthworks and fortifications, which nearly resulted in a rout of his army.
The Second Battle of Bull Run (August 28-30, 1862) was one of the most decisive battles fought during the Civil War, and it was also one of the most unlikely. Less than three months before the battle, Joseph E. Johnston's Army of Northern Virginia had been pushed back nearly all the way to Richmond by George B. McClellan's Army of the Potomac, so close that Union soldiers could see the church steeples of the Confederate capital. And yet, at the end of Second Manassas, Robert E. Lee's Army of Northern Virginia found itself in the field unopposed about 20 miles away from the Union capital of Washington D.C.
The bloodiest day in American history took place on the 75th anniversary of the signing of the Constitution. On September 17, 1862, Robert E. Lee’s Confederate Army of Northern Virginia fought George McClellan’s Union Army of the Potomac outside Sharpsburg along Antietam Creek. That day, nearly 25,000 would become casualties, and Lee’s army would barely survive fighting the much bigger Northern army. Although the battle was tactically a draw, it resulted in forcing Lee’s army out of Maryland and back into Virginia, making it a strategic victory for the North and an opportune time for President Abraham Lincoln to issue the Emancipation Proclamation, freeing all slaves in the rebellious states.
Though Stones River is mostly overlooked as a Civil War battle today, it had a decisive impact on the war. The two armies had both suffered nearly 33% casualties, an astounding number in 1862 that also ensured Rosecrans would not start another offensive campaign in Tennessee until the following June. The Union victory also ensured control of Nashville, Middle Tennessee, and Kentucky for the rest of the war, prompting Lincoln to tell Rosecrans, “You gave us a hard-earned victory, which had there been a defeat instead, the nation could scarcely have lived over."

1. The Civil War in 1862: The Battles That Saved Both the North and South

2. The Civil War in 1862: The Battles That Saved Both the North and South