A Celebrated Love: The Marriage Equality Poem: And Other Poems for Love, Lust, Purpose & Pride 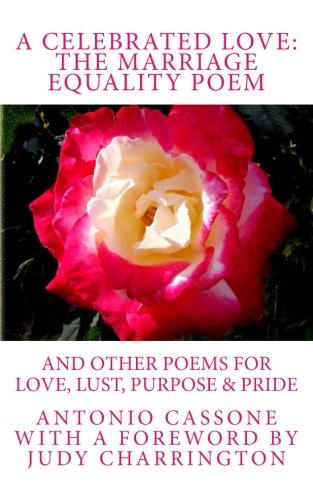 In their 12th published work, Antonio Cassone shares poems from their collection celebrating marriage equality, love, lust, purpose and pride. Included are classic pieces, Him, The Ecstasy, the anti-bullying statement Sticks and Stones, When Pebbles Get in Your Way and the forgiveness anthem At the Edge of Serenity; along with the new cornerstone of this volume, A Celebrated Love. The collection is bookmarked with a foreword by friend and colleague, Judy Charrington and an epilogue by the author, providing deep insight into the selections. This collection reminds the reader of some of Cassone’s best works.

ANTONIO CASSONE is an accomplished, best-selling author with twelve books to his credit, including A CELEBRATED LOVE: THE MARRIAGE EQUALITY POEM AND OTHER POEMS FOR LOVE, LUST, PURPOSE & PRIDE (2013); THE WARMTH OF CHRISTMAS – PHOTOGRAPHY BY CASSONE, VOLUME 1 (2013); HOW TO CELEBRATE CHRISTMAS WHEN THE WORLD DOESN’T STOP SPINNING (2013), OPENING THE NAKED WINDOW (2008), book two of their memoir series and THE NAKED WINDOW: EXPOSED/REVELATIONS (2009), books three and four of the memoir series were released as a combo through Create Space, along with BLUE SKY: ...WRITINGS FOR STEVEN AND OTHER PEOPLE I HAVE LOVED FOR SO LONG (2010), a third volume of poetry (with some prose) RAMBLINGS FROM THE RAGGED EDGE (2013), DIVA/CASSONE: A COLLECTION OF POETRY – THE RECONSTRUCTION EDITION (2013), LOOKING THROUGH THE NAKED WINDOW: THE RESTORATION CHRONICLES (2013), which is a re-issue of the first installment of the memoir series with a tighter edit and a bit of new material and ELOQUENT VERSIFICATIONS: POEMS MY FATHER LEFT ME (2013), a collaboration with his late father, Robert “Rocky” Cassone showcasing his dad’s poetic works. CASSONE has over 150 poems published on various poetry websites and has been honored numerous times for his works by The International Society of Poets, Famous Poets, The International Library of Poetry and The Iliad Press. ANTONIO CASSONE, originally from Detroit, is also a photographer and entertainer with a career enriched with many diverse projects since 1988. He has produced, performed, written and co-directed two major, award-winning plays; the semi-autobiographical "The Ashley Correspondence" in 1993 and "Don't Let Me Be Lonely Tonight" in 1995 at 1515 Broadway in Detroit's theatre district. Cassone produced/performed/directed eight "Extravaganza's" in the `90s, which were fashion/variety shows and several spoken-word recordings including "Diva/Cassone," his first poetry cd. He currently resides in South Florida and is penning the rest of his memoirs NAKED WINDOW book series, another poetry collection and has a variety of spoken word and video projects in the works. He also started the Cassone2007 channel on YouTube with the 'web reality series' GETTING READY (which features a behind the scenes look at Cassone’s female impersonation career and other facets of the multi-faceted artist’s life), which is now in its 20th season and you can also find select spoken word recordings and select slideshows of Photography by Cassone.

1. A Celebrated Love: The Marriage Equality Poem: And Other Poems for Love, Lust, Purpose and Pride