Verma, Dr. Vinod Programming your Life with Ayurveda: A practical manual for a holistic way of living for well being, health, and preventing ailments

Programming your Life with Ayurveda: A practical manual for a holistic way of living for well being, health, and preventing ailments 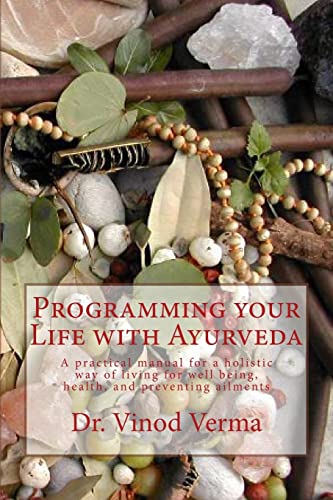 Programming your Life with Ayurveda is a practical guide for simple Ayurvedic practices, which can help you for maintaining health, promoting your immunity and vitality (ojas) and preventing ailments. Dr. Verma has written this practical guide with a very modern approach, where she gives you a specially designed brief yoga programme FEEP (Five Element Energy Programme) and five breath stress release exercise based on Patanjali’s yoga (PSAUV). This is the only practical manual of Ayurveda daily practices that exists till date. It is meant to help you adopt simple Ayurvedic practices, some home remedies and detoxification and purification methods you can do at home. In today’s busy world, there are many people who feel stressed and oppressed due to excessive activities. They wish to change their lifestyle for the better but do not have time to go regularly to a spa or something alike. This book is a practical guide for inspiring you to change your lifestyle for gaining more energy and peace of mind. You can directly begin with a daily programme step by step and see the results for yourself. Merely by getting up peacefully in the morning and starting your day with a glass of cardamom hot water and then in the evening performing some small bed time rituals can change your life tremendously. You can integrate these practices into your daily life step by step. The positive results will inspire you to do more for yourself. The aim of the book is to change your quality of life and to be able to have more joy from life with enhanced fundamental energy and by preventing ailments. The ailments attack us due to a low basic energy level (ojas), accumulation of toxins in the body, stress and mental frustration and a lifestyle not in rhythm with nature. All these fundamental factors are taken care of in this book and your are told methods to get rid of these four enemies that make you live life only fifty percent or even lesser. Your little effort can change your life for the better and can improve your present and future. Enjoy your youth and invest in old age. This book has been published in German, French, Hindi, Slovenian and Czech. Dr Verma is a world renowned scientist who has studied Neurobiology in Paris in the University of Pierre et Marie Curie (old Sorbonne) and has worked in prestigious places like National Institutes of Health, Bethesda, USA and Max Planck Institute in Germany. She resolved to do research in health rather than disease after having worked in a pharmaceutical company in Germany in 1984. She was the first one to bring scientific aspects of Ayurveda to the West. Her books on Yoga and Ayurveda as a comprehensive and holistic scientific system appeared in late eighties and early nineties in various European languages. She has written 23 books on various aspects of health until now. For more details see www.ayurvedavv.com

Along with a doctorate degree in reproduction biology in India, Dr. Verma studied Neurobiology in Paris University and obtained a second doctorate. She pursued advanced research at the National Institutes of Health, Bethesda (USA) and the Max-Planck Institute in Freiburg, Germany. At the peak of her career in medical research in a pharmaceutical company in Germany, she realised that the modern approach to health care is basically fragmented and non-holistic. Besides, we are directing all our efforts and resources to cure disease rather than maintaining health. In response, Dr. Verma founded The New Way Health Organisation (NOW) in 1986 to spread the message of holistic living, preventive methods for health care and to promote the use of mild medicine and various self-help therapeutic measures. Dr. Verma grew up with a strong familial tradition of Ayurveda with a grandmother who had enormous Ayurvedic wisdom and was a gifted healer. She has studied Ayurveda in the traditional Guru-shishya style with Acharya Priya Vrat Sharma of the Benares Hindu University for 23 years. Dr. Verma is an ardent researcher and is working hard to compile the living tradition of Ayurveda and spread it in the world through her books and other activities. She has published twenty three books on yoga, Ayurveda, Women and Companionship. The books are published in various languages of the world. Besides, she has published numerous scientific articles. Several other books are in preparation. She lectures extensively, teaches in Europe for several months a year, trains students at her two centres in India and gives radio and television programmes. A film on Ayurveda with her was made by German television in 1995 and was shown in 100 countries, in 130 languages. It was the first film on Ayurveda. Dr. Verma has founded Charaka School of Ayurveda to train interested people with genuine Ayurvedic education so that they can further impart the knowledge of Ayurvedic way of life and save people from becoming a victim of charlatanry in Ayurveda. She is doing several research projects on medicinal plants and their combination in the form of remedies. She is the founder and chairperson of The Ayurveda Health Organisation, which is a charitable trust for distributing and promoting Ayurvedic remedies and yoga therapy in rural areas of India.

1. Programming Your Life With Ayurveda : A Practical Manual for a Holistic Way of Living for Well Being, Health, and Preventing Ailments