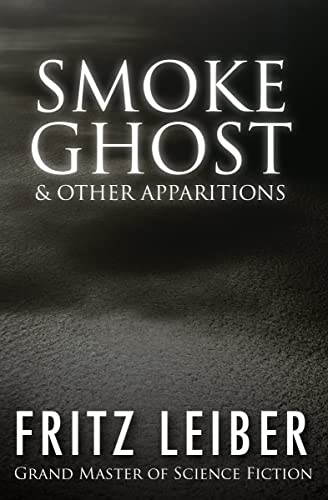 Fresh from its original appearance in a limited edition from small press Midnight House, this collection follows the acclaimed title The Black Gondolier and Other Stories and is also edited by John Pelan and Steve Savile. Smoke Ghost & Other Apparitions is a new collection of stories by Fritz Leiber. Assembled here is a selection of Mr. Leiber's best horrific tales, many of which are previously uncollected and have been virtually unobtainable for decades. During his more than fifty years of writing, Leiber was an acknowledged master of the weird tale, and the stories in this collection include works originally published in the magazines from the 1940s onward, including such venues as Unknown, Thrilling Mystery, Startling Stories, and Fantasy, and also works published over the decades in such places as Rogue, The Magazine of Fantasy & Science Fiction, Mike Shayne's Mystery Magazine, and the acclaimed horror specialty magazine Whispers 13-14. Besides "Smoke Ghost" (1941), the stories include "Cry Witch" (1951), "I'm Looking for Jeff" (1952), "Ms. Found in a Maelstrom" (1959), "The Button Molder" (1979), "Dark Wings" (1976), and "The Enormous Bedroom" (2001), which is original to this volume. While much of Leiber's seminal science fiction and fantasy remain in print, his work in the field of supernatural horror has been sadly neglected until now.

Fritz Leiber is considered one of science fiction's legends. Author of a prodigious number of stories and novels, many of which were made into films, he is best known as creator of the classic Lankhmar fantasy series. Fritz Leiber has won awards too numerous to count including the coveted Hugo and Nebula, and was honored as a lifetime Grand Master by the Science Fiction Writers of America. He died in 1992.

Buchbeschreibung Open Road Media, United States, 2014. Paperback. Zustand: New. Language: English. Brand new Book. A collection of supernatural horror stories by a multiple award-winning master of the fantastic. From the author of Swords and Deviltry and many other classic novels, a recipient of both the Hugo and Nebula Awards, this is a treasure trove of horrific tales, many of which remained out of print for decades after appearing in such magazines as Unknown, Thrilling Mystery, Startling Stories, The Magazine of Fantasy & Science Fiction, and the acclaimed horror specialty magazine Whispers 13-14. In addition to the title story, this collection also includes: "Cry Witch!" (1951), "I'm Looking for Jeff" (1952), "Ms. Found in a Maelstrom" (1959), "The Button Molder" (1979), "Dark Wings" (1976), and "The Enormous Bedroom" (2001), which is original to this volume. Bestandsnummer des Verkäufers AAV9781497642195

6. Smoke Ghost and Other Apparitions