Verwandte Artikel zu Reggie Miller: The Remarkable Story of One of 90s Basketball... 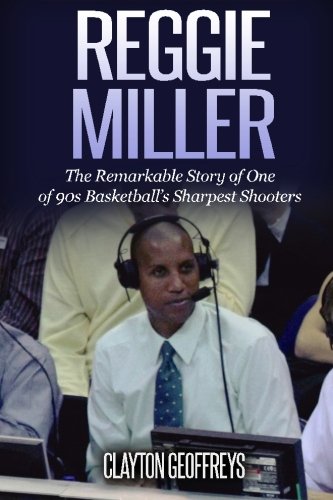 Read on your PC, Mac, smartphone, tablet or Kindle device!

In Reggie Miller: The Remarkable Story of One of 90s Basketball's Sharpest Shooters, you'll read about the inspirational story of basketball's premier shooting guard, Reggie Miller. Reggie Miller broke the record books during his incredible eighteen-year NBA career. In an age filled with greats like Michael Jordan, Karl Malone, Patrick Ewing, Hakeem Olajuwon and John Stockton, Reggie played in one of the most exciting eras of modern basketball. While the Indiana Pacers failed to win a ring during Reggie’s tenure, they played some of the most spectacular playoff series in NBA history and made it to the NBA Finals in 1999-2000 before ultimately falling to the Los Angeles Lakers.

A hall of famer, Reggie Miller had one of the smoothest strokes that basketball has ever seen. While newer players like Steph Curry may statistically be the best shooters to play the game, Reggie Miller still easily remains a top shooting guard in NBA history.

Here is a preview of what is inside this book:An excerpt from the book:

The NBA has two kinds of star players. There are those who are always in the ear of their opponents, teammates, referees, fans, and anybody near the basketball court, telling everyone how good they are. Those types of players have a knack of getting opponents out of their rhythm and pumping their team up. Other players would rather lead by example and let their game do the talking for them, believing that sinking a buzzer-beating three-point shot says more than telling someone that you have got skills. They’d rather methodically kill you on the court by destroying your defense and by making you look silly while trying to guard them. Then there is Reggie Miller.

Perhaps no other player in NBA history has combined the two types of players more so than Miller. One cannot think of Miller without harkening back to some of his more famous on-court escapades, such as his back-and-forth banter with movie director Spike Lee in Madison Square Garden, overtly giving the choke sign by visibly wrapping his hands around his neck for everyone to see, bowing to all sides of the arena in a mocking manner and even head-butting a player (see Starks, John, 1993 NBA Playoffs). Miller relished road games and playing the role of the villain so much that his 1999 autobiography was titled I Love Being the Enemy. That’s simply the type of player Miller was. Some players try to mentally block out road crowds. Reggie loved hearing the boos, and he fed off that negativity.

But focusing on Miller’s flamboyance would be a disservice to his hard work, dedication to his craft, and high basketball intelligence. It would also ignore the clutch play that became a signature of Miller’s game; the blood running through his veins was perhaps colder than any basketball player not named Michael Jordan. If there was a player who had ice-cold poisonous blood running through his veins, it was Reggie Miller.

Clayton Geoffreys was born and raised in Norwalk, Connecticut. Growing up, Clayton could often be found spending afternoons reading in the local public library about management techniques and leadership styles, along with overall outlooks towards life. It was from spending those afternoons reading about how others have led productive lives that Clayton was inspired to write this book. Usually Clayton write works around sports to learn more about influential athletes in the hopes that from his writing, you the reader can walk away inspired to put in an equal if not greater amount of hard work and perseverance to pursue your goals. If you are a sports junkie like Clayton, you can read his sports-related works including Steve Nash: The Inspiring Story of One of Basketball's Greatest Point Guards and Stephen Curry: The Incredible Story of One of Basketball's Sharpest Shooters in the Kindle Store. Clayton also wrote 88 Productivity Hacks: Key Habits on How to Beat Stress, Achieve Goals, and Live a Fulfilling Life, which can also be found in the Kindle Store.

1. Reggie Miller: The Remarkable Story of One of 90s Basketball's Sharpest Shooters