Verwandte Artikel zu The Murders in the Rue Morgue

Poe, Edgar Allan The Murders in the Rue Morgue

The Murders in the Rue Morgue 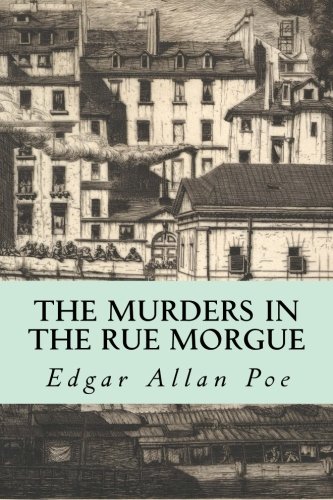 "The Murders in the Rue Morgue" is a short story by Edgar Allan Poe published in Graham's Magazine in 1841. It has been recognized as the first modern detective story; Poe referred to it as one of his "tales of ratiocination". The story opens with a lengthy explanation of ratiocination. Dupin demonstrates his prowess by deducing his companion's thoughts as if through apparent supernatural power. The story then turns to the baffling double murder of Madame L'Espanaye and her daughter at their home in the Rue Morgue, a fictional street in Paris. According to newspaper accounts, the mother was found in a yard behind the house, with multiple broken bones and her throat so deeply cut that her head fell off when the body was moved. The daughter was found strangled to death and stuffed upside down into a chimney. The murders occurred in a fourth-floor room that was locked from the inside; on the floor were found a bloody straight razor, several bloody tufts of gray hair, and two bags of gold coins. Several witnesses reported hearing two voices at the time of the murder, one male and French, but disagreed on the language spoken by the other. The speech was unclear, and every witness admits that he does not know the language he claims to have heard.Paris natives Dupin and his friend, the unnamed narrator of the story, read these newspaper accounts with interest. The two live in seclusion and allow no visitors. They have cut off contact with "former associates" and venture outside only at night. "We existed within ourselves alone", the narrator explains. When a bank clerk named Adolphe Le Bon is arrested even though no evidence exists pointing to his guilt (other than his delivering the gold coins to the two ladies the day before), Dupin becomes intrigued and remembers a service that Le Bon once performed for him. He decides to offer his assistance to "G–", the prefect of police.Because none of the witnesses can agree on the language the murderer spoke, Dupin concludes they were not hearing a human voice at all. He and the narrator examine the house thoroughly; the following day, Dupin dismisses the idea of both Le Bon's guilt and a robbery motive, citing the fact that the gold was not taken from the room. He also points out that the murderer would have had to have superhuman strength to force the daughter's body up the chimney. He formulates a method by which the murderer could have entered the room and killed both women, involving an agile climb up a lightning rod and a leap to a set of open window shutters.Poe biographer Jeffrey Meyers sums up the significance of "The Murders in the Rue Morgue": "[it] changed the history of world literature." Often cited as the first detective fiction story, the character of Dupin became the prototype for many future fictional detectives, including Arthur Conan Doyle's Sherlock Holmes and Agatha Christie's Hercule Poirot. The genre is distinctive from a general mystery story in that the focus is on analysis. Poe's role in the creation of the detective story is reflected in the Edgar Awards, given annually by the Mystery Writers of America."The Murders in the Rue Morgue" also established many tropes that would become common elements in mystery fiction: the eccentric but brilliant detective, the bumbling constabulary, the first-person narration by a close personal friend. Poe also portrays the police in an unsympathetic manner as a sort of foil to the detective. Poe also initiates the storytelling device where the detective announces his solution and then explains the reasoning leading up to it. It is also the first locked room mystery in detective fiction.

"The Murders in the Rue Morgue" is a short story by Edgar Allan Poe published in Graham's Magazine in 1841. It has been recognized as the first modern detective story; Poe referred to it as one of his "tales of ratiocination". Two works that share some similarities predate Poe's stories, including Das Fräulein von Scuderi (1819) by E.T.A. Hoffman and Zadig (1747) by Voltaire

1. The Murders in the Rue Morgue

2. The Murders in the Rue Morgue