Verwandte Artikel zu The Making of a Marchioness

Burnett, Frances Hodgson The Making of a Marchioness

The Making of a Marchioness 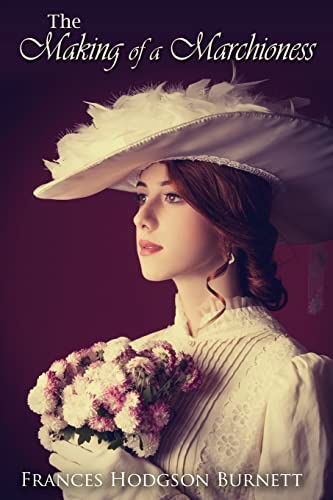 “He felt the scent and the golden glow of the sunset light as intensely as he felt the dead silence which reigned between himself and Hester almost with the effect of a physical presence.”
--- Frances Hodgson Burnett, Emily Fox-Seton

First published in 1901, The Making of a Marchioness follows thirty-something Emily who lives alone, humbly and happily, in a tiny apartment and on a meager income. She is the one that everyone counts on but no one goes out of their way to accommodate. This Cinderella-like story remains a much-loved favorite among many.

This book is followed by a sequel, The Methods of Lady Walderhurst. Later, the two novels were combined into Emily Fox-Seton.

The Making of a Lady is a television film based on the 1901 novel The Making of a Marchioness by Frances Hodgson Burnett that uses a screenplay adaptation by Kate Brooke. The film premiered in 2012 on ITV in Britain and was subsequently broadcast on PBS in the United States in 2014. Directed by Richard Curson Smith, the film stars Lydia Wilson as Emily, Linus Roache as Lord James Walderhurst, Joanna Lumley as Lady Maria Byrne, and James D’Arcy as Captain Alec Osborn.

Frances Eliza Hodgson was born in Cheetham, near Manchester, England. After her father died in 1852, the family eventually fell on straitened circumstances and in 1865 emigrated to the United States, settling near Knoxville, Tennessee. There, Frances began writing to help earn money for the family, publishing stories in magazines from the age of 19. In 1870 her mother died and in 1872 she married Swan Burnett, who became a medical doctor after which they lived in Paris for two years where their two sons were born before returning to the US to live in Washington D.C. There she began to write novels, the first of which (That Lass o' Lowries), was published to good reviews. Little Lord Fauntleroy was published in 1886 and made her a popular writer of children's fiction, although her romantic adult novels written in the 1890s were also popular. She wrote and helped to produce stage versions of Little Lord Fauntleroy and A Little Princess.

Burnett enjoyed socializing and lived a lavish lifestyle. Beginning in the 1880s, she began to travel to England frequently and bought a home there in the 1890s where she wrote The Secret Garden. Her oldest son, Lionel, died of tuberculosis in 1892, which caused a relapse of the depression she struggled with for much of her life. She divorced Swan Burnett in 1898 and married Stephen Townsend in 1900, and divorced him in 1902. Towards the end of her life she settled in Long Island, where she died in 1924 and is buried in Roslyn Cemetery, on Long Island.

In 1936 a memorial sculpture by Bessie Potter Vonnoh was erected in her honour in Central Park's Conservatory Garden. The statue depicts her two famous Secret Garden characters, Mary and Dickon.

1. The Making of a Marchioness

2. The Making of a Marchioness