Dorakis, Nikki The Male Mysteries: Rites & Rituals For The Journey To Manhood

The Male Mysteries: Rites & Rituals For The Journey To Manhood 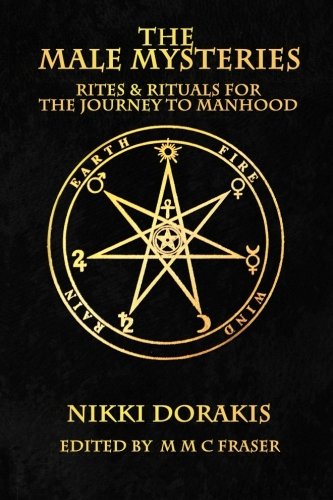 Nikki Dorakis (1954-2013) was a Pagan Priest and an ordained Minister of the Church of Spiritual Humanism. Concerned with what he saw as a lack of spiritual guidance and the effect of modern societal changes on the male psyche, he began to explore the role of a Pagan Rite of Passage for young men and how this could be used to develop positive attitudes, qualities and attributes to the benefit of the individual, their community, and society as a whole. This unique text is drawn from his years of experience as an occultist, his own faith and the teachings of various spiritual seekers he met during extensive travels undertaken throughout his life. The text gives in-depth instructions on how to perform such Rites, but also explores what it really means to be a man; stripping away the stereotypes of male aggression and dominance, and discusses how a pagan rite of passage combined with the development of an ethical code can enable men to embrace and develop their multifaceted nature to stand within their own power and play a fulfilling role within society, to the benefit of all.

Nikki Dorakis (1954-2013) was born on the Isle of Wight, England. He left the Isle of Wight at age 18 and travelled the world extensively, meeting and discussing with many priests, shamans, witches, sages and holy men from a variety of paths. As a Pagan Priest and an ordained Minister of the Church of Spiritual Humanism, Nikki has written a variety of occult based pamphlets and books, as well as a fantasy fiction collection.

1. The Male Mysteries: Rites & Rituals For The Journey To Manhood

2. The Male Mysteries: Rites & Rituals for the Journey to Manhood

3. The Male Mysteries: Rites and Rituals for the Journey to Manhood