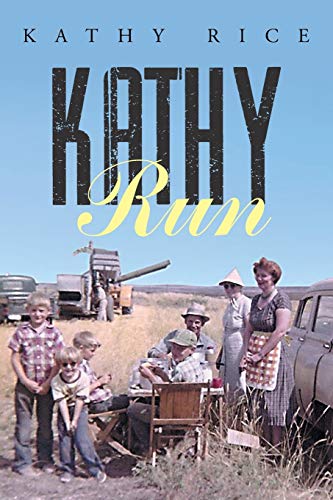 Kathy's heartwarming story begins in 1961 where she lives in a prairie home in Northeastern Montana near Four Buttes. Five-year-old Kathy is the youngest of 5 children in the post World War Ii era, and the story is the charming tale of a little girl growing up in the love and security of her family and community, the exciting times of calving, planting, harvesting, and trips to town. She eludes to Laura Ingall's Wilder in her story, ending with the dream to be a character in a book, just like Laura was. The book is composed of three sections, each progressing through her elementary school years. The book is the true story of Kathy Rustebakke, with her best friends Kristi and later Patrice, as her family transitions from the horse and buggy days into modern life.

Kathy Rice grew up on a farm near Scobey, Montana with her parents, sister and three brothers. Her mother, Dorothy Rustebakke was a prolific writer working as a journalist for the local weekly newspaper, and a contributing reporter to state and national newsfeeds. Kathy participated in several mission outreaches including a Wagon Train in 1976 that crossed America with Youth With A Mission where she fell in love and married Donald Rice, a graduate of Milton Hershey School in Pennsylvania. They lived in Haiti for two years, and returned to Montana and later Pennsylvania and raised six children. One day she received an envelope from her mother. Inside was a newspaper “The Montana Journal” and a check for an essay that was published in the issue. Kathy had written an essay for a college writing class. Her mother knew Kathy needed a boost to start taking her writing seriously, and had submitted her essay. Here was the finished product – no rejection slips, no negative feedback, just the published article and the paycheck. Encouraged by her mother and inspired by the Laura Ingalls Wilder's “Little House” series, Kathy started writing about her young charmed life growing up on the Montana prairie. The book not only appeals to adults who were children in the 1950's and 60's, but appeals to children who enjoy traveling back in time where they can experience life as it was back “in the good ol' days”.