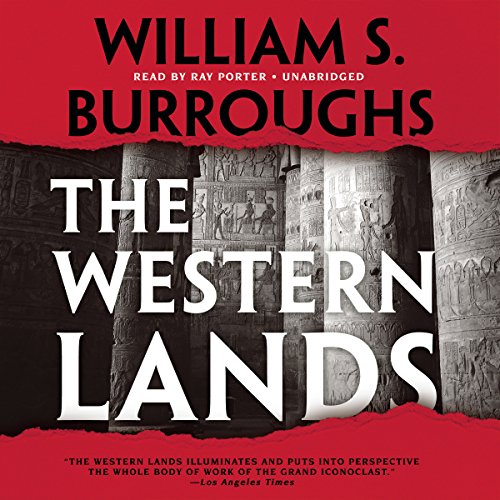 Here is the final novel of Burroughs' Red Night trilogy, available in audio for the first time.A fascinating mix of autobiographical episodes and extraordinary Egyptian theology, Burroughs' final novel is poignant and melancholic. Blending war films and pornography, and referencing Kafka and Mailer, The Western Lands confirms Burroughs' status as one of America's greatest writers. The final novel of the trilogy begun with Cities of the Red Night and The Place of Dead Roads is a Book of the Dead for the nuclear age, an astonishing, profound, and revealing meditation on morality, loneliness, life, and death.

William S. Burroughs (1914-1997) was an American author, painter, and spoken-word performer who has had a wide-ranging influence on American culture. Jack Kerouac called him the "greatest satirical writer since Jonathan Swift." Norman Mailer declared him "the only American writer who may be conceivably possessed by genius." A postmodernist and a key figure of the beat generation, he focused his art on a relentless subversion of the moral, political, and economic conventions of modern American society, as reflected in his often darkly humorous and sardonic satire. He wrote eighteen novels and novellas, six short-story collections, and four collections of essays. No fewer than five books of his interviews and correspondence have been published. He also collaborated on projects and recordings with numerous performers and musicians and made many appearances in films. He was elected to the American Academy and Institute of Arts and Letters in 1983 and in the following year was appointed to the Ordre des Arts et des Lettres by the French government.