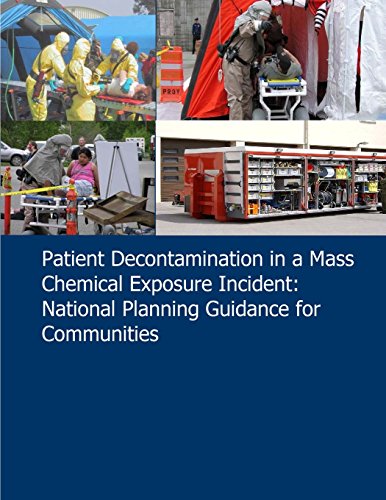 Each day, substantial quantities of hazardous chemicals are produced, transported, stored, and used for industrial or household purposes. Stockpiles of chemical weapons around the world, while currently being destroyed, still exist. Various terrorist organizations and non-state actors have shown interest in procuring or developing and using chemicals in terrorist attacks. In each instance, these chemicals pose significant risk to public health due to the potential for accidental or intentional release that could harm large numbers of people. Civilian first responders (e.g., fire, hazardous materials (HAZMAT), and emergency medical service) and first receivers (e.g., health care facility-based and other clinical personnel), along with emergency managers, public health practitioners, law enforcement officials, and risk communication experts, must be prepared to respond to such incidents. The potential for a large-scale chemical release resulting in the need to decontaminate an overwhelming number of people has garnered wide interest among policy makers and emergency planners. Guidance and best practice documents have been published and specialized equipment has been purchased. However, decontamination practices have evolved based on sparse evidence. Limited research has been conducted on decontaminating civilians. Patient decontamination, like other aspects of disaster response, medicine, and public health, could benefit from an assessment of the body of evidence, enhanced incorporation of the evidence into planning and practice, and additional study to generate needed evidence. Furthermore, many current guidance and best practice documents do not address the full spectrum of issues that a community may face when large-scale patient decontamination is necessary in a mass chemical exposure incident. The need for examination of current patient decontamination practices was identified by experts in the emergency response and medical communities. The White House National Security Council (NSC) staff followed with a request for evidence-based national planning guidance for mass patient decontamination in a large-scale chemical release. Efforts to enhance preparedness for patient decontamination in a mass exposure incident may also benefit the care that is provided to individual contaminated patients in other circumstances.