Flores, Daniel B. Santa Rosa, A Journey Through Time

Santa Rosa, A Journey Through Time 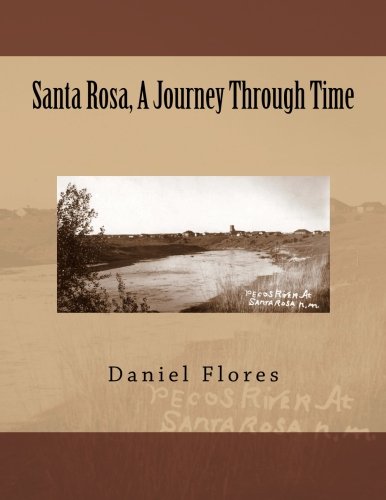 Santa Rosa, A Journey Through Time is an effort to continue to tell the story of Santa Rosa’s rich and colorful past. It is important that the story of Santa Rosa’s past be documented and preserved for future generations. A Journey Through Time makes use of many old photographs to provide a glimpse into what life was like in Santa Rosa from the time of its founding. There were actually two Santa Rosas that once existed, the small village founded by Celso Baca, old town, and the boom town that resulted when the Rock Island railroad came into the area in 1901, new town. Celso Baca’s village at one time was also known as Eden. The old and new towns together form what is now the town of Santa Rosa. Much of A Journey Through Time is devoted to the area lakes that have given Santa Rosa the title of “City of Natural Lakes.” Blue Hole, Twin Lakes, Park Lake, and Hidden Lake and the role they have played in Santa Rosa each have their own individual sections. The man-made Tres Lagunas are also included. Power Dam and the role it played in bringing electricity to Santa Rosa also is part of A Journey Through Time. Other vignettes include the building of the Pecos river bridge in 1936, the destructive flood of 1937; Santa Rosa’s once booming asphalt mines, and the Bunion Derby of 1928. The Bunion Derby and the asphalt mines have an important connection that is revealed. A pictorial section of historic Santa Rosa residences, illustrated with vintage photographs, helps provide a glance of life during Santa Rosa’s early days. Many of the residences are now over a hundred years old.

Daniel B. Flores was born in Puerto de Luna, New Mexico in 1946, in the home of his paternal grandfather, Cipriano Flores. That is the same house where Billy the Kid ate his last Christmas dinner in 1880. In 1880 the house belonged to his maternal great-grandfather, Alexander Grzelachowski. Grzelachowski built the house in 1870. Grzelachowski’s estate served as a combination residence and mercantile store. A large warehouse was also connected to the rear of the store, complete with a cellar. He is the oldest of thirteen children. The Flores family lived in Puerto de Luna until they moved to Santa Rosa in October 1959. Flores attended public schools in Puerto de Luna and Santa Rosa. After graduating from Santa Rosa High School in 1964, he enrolled at the University of New Mexico. He received a BA degree from the University of New Mexico in 1969 and an MA degree in Educational Administration from New Mexico Highlands University in 1984. He returned to Santa Rosa after graduating from UNM in 1969 and was employed by the Santa Rosa Consolidated Schools for over forty years. After working as a teacher for fifteen years, he spent the last twenty-five years of his educational career as an administrator. He served as middle school principal for two years and then was high school principal for seven years. He retired from the school system in July 2009 after working his last sixteen years as the school district's superintendent. During his tenure as school superintendent the school district built a new middle school complex located in the southwestern part of town along U. S. Highway 54 and Camino de Vida. The school district also built a new high school gym and fine arts center. The 1996-97 school year saw the Santa Rosa Consolidated Schools become the first public school district in the state to have all its classrooms and offices wired for the Internet. The school district also had major remodeling projects at the high school, the Anton Chico schools and Santa Rosa Elementary school. He was inducted into the New Mexico Activities Association Hall of Fame in 2002. He was named the New Mexico School Superintendent of the Year in 2007 by the New Mexico School Superintendent’s Association. While working as a superintendent he was very active in state-wide educational organizations.