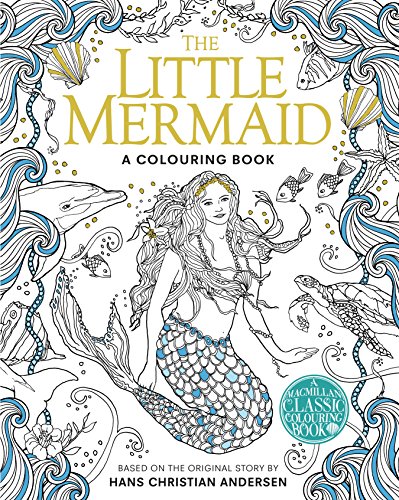 The Little Mermaid Colouring Book is a beautiful and desirable colouring book, based on the original story by Hans Christian Andersen about a young mermaid who falls in love with a prince and is willing to give up her life in the sea to gain his love. Inspired by the classic illustrations of Edmund Dulac, this book is wonderfully decorative and enchanting, full of familiar characters and irresistible patterns that are perfect for colouring in. Also available as Macmillan Classic colouring books: The Macmillan Alice Colouring Book The Jungle Book Colouring Book The Moomin Colouring Book

Hans Christian Andersen (1805 - 1875) was a Danish author and prolific writer of plays, novels and poems, but he is best remembered for his fairy tales. Among his most-loved stories are The Emperor's New Clothes, The Ugly Duckling and The Snow Queen, but it is probably for The Little Mermaid that he is most famous. He was born in Odense, and his father introduced him to literature by reading to him Arabian Nights. When he was fourteen he moved to Copenhagen to work as an actor, but soon began to focus on his writing. The Little Mermaid was first published in a collection called Fairy Tales in 1835. Edmund Dulac (1882 - 1953) was born in Toulouse, France. He attended art classes at the Ecole des Beaux Arts, and then in 1903 won a scholarship to the Academie Julian in Toulouse. Interested in English culture, in 1904 Dulac moved to London and changed his name to the more English spelling of Edmund, and in 1912 he became a British citizen. His first commission, at the age of only twenty-two, was to illustrate the collected works of the Bronte sisters. Dulac became one of the most memorable and recognisable illustrators of the early twentieth century and his illustrations for The Little Mermaid remain among the most iconic images for this tragic story.