Verwandte Artikel zu The Inner Teachings Of The Philosophies And Religions... 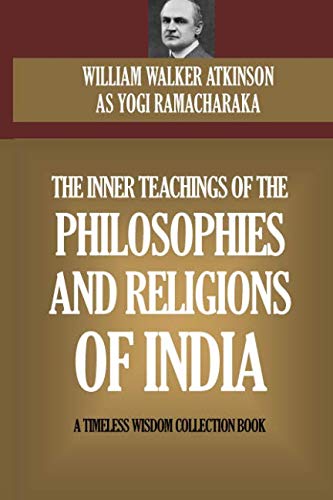 From thy sources have come the languages of the world, in which men have expressed the thoughts arising in their minds—thy word symbols have made possible advanced thinking and expression of thought. From thy thinkers and teachers have come the root ideas which have since grown into many a religious and philosophical tree, with bud, leaf, flower, and fruit. To thee may be traced the great philosophical conceptions and religious truths that have animated and inspired man’s thought for centuries. Thy hundred centuries of deep thought and meditation upon the Mysteries of Existence— the Secret of the Absolute—have proved as the leaven which has lightened the bread of life, and has raised the sodden mass of materiality and changed its character so that it may be partaken of without harm by reason of the transforming power of thy leaven!The history of India runs back for many centuries, the Hindus themselves claiming that their records and traditions carry them back over a period of a hundred centuries—10,000 years—and that back of even this great period of time their people existed and had their successive civilizations and periods of race rest. Centuries before our present civilization had dawned—centuries before the Christian religion was established—centuries before even the time of Abraham, and still longer before the time of and the practical beginning of the Jewish religion—the Hindu teachers of philosophy had formed great schools of thought, which in turn had been subdivided by their followers, the teachings of which have come down along the line of the centuries even unto to day. The Vedas and the Upanishads were written centuries ago—beyond the time of recorded history—and have been handed down from teacher to pupil ever since. Before the days of the Sphinx and the Pyramids of Ancient Egypt, India’s great religious and philosophical teachers had formulated their doctrines and founded their schools of thought. Surely such antiquity of teaching, and the corresponding vitality of the doctrines which has kept them alive and vigorous through the passage of these great periods of time, must arrest our attention and command our respect.The leading scholars of the Western world have long since recognized and appreciated the great value and importance of the work of the Hindu thinkers along the line of philosophy, and have freely given credit to them for their fundamental work upon which a great body of the Western thought has been built. In fact, it is difficult to find any form of Western philosophy that has not used the Hindu philosophies as a basis— or, at least, which has not, perhaps unconsciously, restated the fundamental truths uttered centuries before by some Hindu thinker. Every possible form of human philosophical speculation, conception, or theory, has been advanced by some Hindu philosopher during the centuries. It would seem that the Hindu philosophical mind has acted like the finest sieve, through which strained the volume of human philosophical thought, every idea of importance being gathered and applied, by someone, at some time, in India.

Born in Maryland in 1862, he began working life at 15 in his parent’s grocery store. He married at age 27, and became a successful attorney in Pennsylvania. However, stress and over-strain brought him to a physical and mental breakdown that ended in a financial disaster. He looked for healing and in the late 1880’s he found the principles of New Thought, and in applying them he restored his health, mental vigor and material prosperity. He began writing articles on the truths he had discovered. His “A Mental Science Catechism,” appeared in Charles Fillmore's ‘Modern Thought’ in 1889. By the early 1890’s he moved to Chicago, then a major center for New Thought, and became an active promoter of the movement as an editor and author. He wrote his first book, Thought-Force in Business and Everyday Life, in 1900, a series of lessons in personal magnetism, psychic influence, thought-force, concentration, will-power, and practical mental science. Soon after he met Sydney Flower, a well-known New Thought publisher, and in December 1901 he became editor of Flower's New Thought magazine (until 1905). He wrote dozens of articles in the magazine; and later on, he was a regular contributor to Elizabeth Towne’s Magazine, Nautilus. Throughout his subsequent career, Atkinson wrote and published over 100 different books, some under his own name and many under pseudonyms such as Yogi Ramacharaka, Theron Q. Dumont, Theodore Sheldon, Magus Incognito, Edward Walker, Three Initiates and Swami Bhakta Vishita. Among the first to develop the concept of Law of Attraction, Atkinson is considered, together with Orison Swett Marden and Wallace Wattles, the masters of self-development and positive thinking, and the real promoters of New Thought, a movement that came very much to life again with the Millennium He died November 22, 1932 in Los Angeles, California , after 50 years of successful career in law, business, writing, occultism, and a life surrounded by mysteries, including his own death.

1. The Inner Teachings Of The Philosophies And Religions Of India