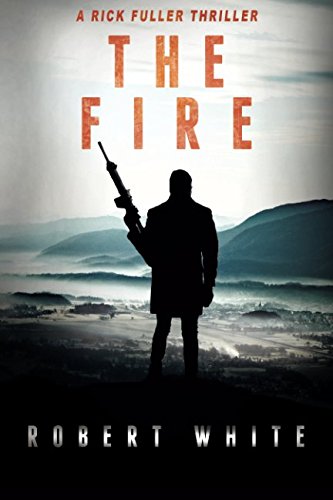 Rick Fuller, a once decorated SAS hero, now Manchester hit-man, likes nothing better than disposing of his employer's rivals in return for a suitcase of cash. His spectacular fall from grace and obsession to discover the identity of the IRA terrorist who gunned down his wife, all but destroyed him. Ten years have passed since that fateful day, and Ireland has seen many changes. Patrick O'Donnell, the man who slaughtered Cathy Fuller on her doorstep in Hereford in 1996 is now the First Minister of the Province, and on the face of it, a trusted and respected politician. The British Secret Service know that O'Donnell is secretly the leader of the New IRA, a group determined to re-kindle the troubles and destabilise the peace process. Not only is The Firm willing to assist Fuller and his team to assassinate O'Donnell, but will pay handsomely for the privilege. 'The Fire' is book two in the Rick Fuller's Manchester Trilogy.

Robert White is an Amazon best selling crime fiction author. His published novels DIRTY, THE FIX and UNREST regularly appear in the top ten downloads in the Crime and Action and Adventure genres. Robert is an ex cop, who captures the brutality of northern British streets in his work. He combines believable characters, slick plots and vivid dialogue to immerse the reader in his fast paced story-lines. He was born in Leeds, England, the illegitimate son of a jazz musician and a factory girl. He hated school, leaving at age sixteen. After joining Lancashire Constabulary in 1980, he served for fifteen years, his specialism being Tactical Firearms. Robert then spent four years in the Middle East before returning to the UK in 2000. He now lives in Lancashire with his wife Nicola, and his two terrible terriers Flash and Tia. The long awaited sequel to THE FIX....THE FIRE....featuring the tortured ex SAS anti-hero Rick Fuller is available now.