Proust, Marcel Swann's Way: Remembrance of Things Past, Volume One: Volume 1 (In Search of Lost Time)

Swann's Way: Remembrance of Things Past, Volume One: Volume 1 (In Search of Lost Time) 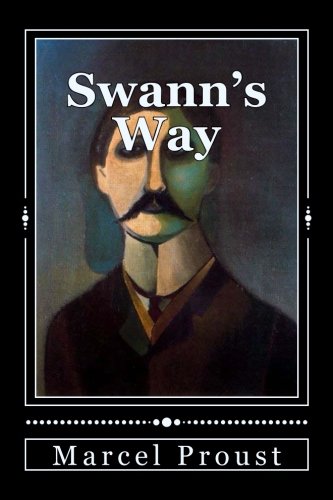 The Narrator begins by noting, "For a long time, I went to bed early." He comments on the way sleep seems to alter one's surroundings, and the way Habit makes one indifferent to them. He remembers being in his room in the family's country home in Combray, while downstairs his parents entertain their friend Charles Swann, an elegant man of Jewish origin with strong ties to society. Due to Swann's visit, the Narrator is deprived of his mother's goodnight kiss, but he gets her to spend the night reading to him. This memory is the only one he has of Combray, until years later the taste of a madeleine cake dipped in tea inspires a nostalgic incident of involuntary memory. He remembers having a similar snack as a child with his invalid aunt Leonie, and it leads to more memories of Combray. He describes their servant Françoise, who is uneducated but possesses an earthy wisdom and a strong sense of both duty and tradition. He meets an elegant "lady in pink" while visiting his uncle Adolphe. He develops a love of the theater, especially the actress Berma, and his awkward Jewish friend Bloch introduces him to the works of the writer Bergotte. He learns Swann made an unsuitable marriage but has social ambitions for his beautiful daughter Gilberte. Legrandin, a snobbish friend of the family, tries to avoid introducing the boy to his well-to-do sister. The Narrator describes two routes for country walks the child and his parents often enjoyed: the way past Swann's home (the Méséglise way), and the Guermantes way, both containing scenes of natural beauty. Taking the Méséglise way, he sees Gilberte Swann standing in her yard with a lady in white, Mme Swann, and her supposed lover: Baron de Charlus, a friend of Swann's. Gilberte makes a gesture that the Narrator interprets as a rude dismissal. During another walk, he spies a lesbian scene involving Mlle Vinteuil, daughter of a composer, and her friend. The Guermantes way is symbolic of the Guermantes family, the nobility of the area. The Narrator is awed by the magic of their name, and is captivated when he first sees Mme de Guermantes. He discovers how appearances conceal the true nature of things, and tries writing a description of some nearby steeples. Lying in bed, he seems transported back to these places until he awakens. Mme Verdurin is an autocratic hostess who, aided by her husband, demands total obedience from the guests in her "little clan." One guest is Odette de Crecy, a former courtesan, who has met Swann and invites him to the group. Swann is too refined for such company, but Odette gradually intrigues him with her unusual style. A sonata by Vinteuil, which features a "little phrase," becomes the motif for their deepening relationship. The Verdurins host M. de Forcheville; their guests include Cottard, a doctor; Brichot, an academic; Saniette, the object of scorn; and a painter, M. Biche. Swann grows jealous of Odette, who now keeps him at arm's length, and suspects an affair between her and Forcheville, aided by the Verdurins. Swann seeks respite by attending a society concert that includes Legrandin's sister and a young Mme de Guermantes; the "little phrase" is played and Swann realizes Odette's love for him is gone. He tortures himself wondering about her true relationships with others, but his love for her, despite renewals, gradually diminishes. He moves on and marvels that he ever loved a woman who was not his type. At home in Paris, the Narrator dreams of visiting Venice or the church in Balbec, a resort, but he is too unwell and instead takes walks in the Champs-Élysées, where he meets and befriends Gilberte. He holds her father, now married to Odette, in the highest esteem, and is awed by the beautiful sight of Mme Swann strolling in public. Years later, the old sights of the area are long gone, and he laments the fugitive nature of places.