Verwandte Artikel zu One Hundred Proofs that the Earth is Not a Globe.

Carpenter, William Boyd One Hundred Proofs that the Earth is Not a Globe.

One Hundred Proofs that the Earth is Not a Globe. 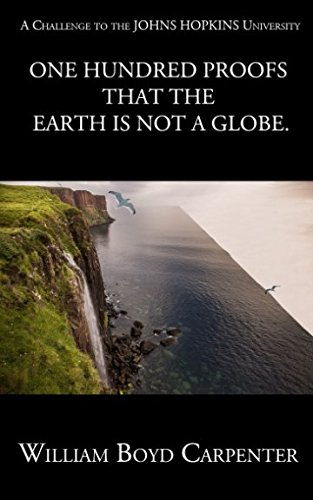 “Parallax,” the Founder of the Zetetic Philosophy, is dead; and it now becomes the duty of those, especially, who knew him personally and who labored with him in the cause of Truth against Error, to begin, anew, the work which is left in their hands. Dr. Samuel B. Rowbotham finished his earthly labours, in England, the country of his birth, December 23, 1884, at the age of 89. He was, certainly, one of the most gifted of men: and though his labours as a public lecturer were confined within the limits of the British Islands his published work is known all over the world and is destined to live and be republished when books on the now popular system of philosophy will be considered in no other light than as bundles of waste paper. For several years did “Parallax” spread a knowledge of the facts which form the basis of his system without the slightest recognition from the newspaper press until, in January, 1849, the people were informed by the “Wilts Independent” that lectures had been delivered by “a gentleman adopting the name of ‘Parallax,’ to prove modern astronomy unreasonable and contradictory,” that “great skill” was shown by the lecturer, and that he proved himself to be “thoroughly acquainted with the subject in all its bearings.” Such was the beginning—the end will not be so easily described. The Truth will always find advocates—men who care not a snap of their fingers for the mere opinion of the world, whatever form it may take, whilst they know that they are the masters of the situation and that Reason is King! In 1867, “Parallax” was described as “a paragon of courtesy, good temper, and masterly skill in debate.” The author of the following hastily-gotten-up pages is proud of having spent many a pleasant hour in the company of Samuel Birley Rowbotham. A complete sketch of the “Zetetic Philosophy” is impossible in a small pamphlet; and many things necessarily remain unsaid which, perhaps, should have been touched upon, but which would to some extent have interfered with the plan laid down—the bringing together, in a concise form, “One Hundred Proofs that the Earth is not a Globe.” Much may be gathered, indirectly, from the arguments in these pages, as to the real nature of the Earth on which we live and of the heavenly bodies which were created FOR US. The reader is requested to be patient in this matter and not expect a whole flood of light to burst in upon him at once, through the dense clouds of opposition and prejudice which hang all around. Old ideas have to be gotten rid of, by some people, before they can entertain the new; and this will especially be the case in the matter of the Sun, about which we are taught, by Mr. Proctor, as follows: “The globe of the Sun is so much larger than that of the Earth that no less than 1,250,000 globes as large as the Earth would be wanted to make up together a globe as large as the Sun.” Whereas, we know that, as it is demonstrated that the Sun moves round over the Earth, its size is proportionately less. We can then easily understand that Day and Night, and the Seasons are brought about by his daily circuits round in a course concentric with the North, diminishing in their extent to the end of June, and increasing until the end of December, the equatorial region being the area covered by the Sun’s mean motion. If, then, these pages serve but to arouse the spirit of enquiry, the author will be satisfied. The right hand of fellowship in this good work is extended, in turn, to Mr. J. Lindgren, 90 South First Street, Brooklyn, E. D., N. Y., Mr. M. C. Flanders, lecturer, Kendall, Orleans County, N. Y., and to Mr. John Hampden, editor of “Parallax” (a new journal), Cosmos House, Balham, Surrey, England.

One Hundred Proofs that the Earth is Not a Globe.