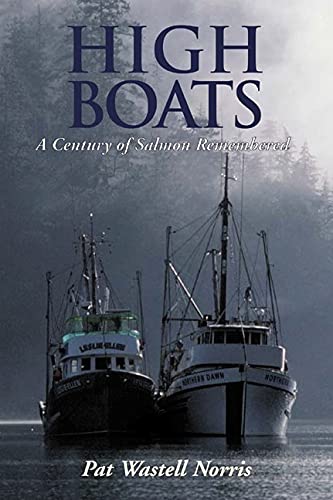 For most of the 20th century, life in British Columbia's remote coastal towns was rough, raw and often dangerous, but it was still the golden age of the West Coast fishery. If you were smart, tough and lucky enough to find a big run, roll with the weather and stay afloat, there was good money to be made on the boats--money enough to raise a family, buy a house, maybe put down a deposit on a bigger boat.

There was also steady, if lower-paid, work ashore in the cannery towns such as Alert Bay, Namu and Ceepeecee that sprouted like mushrooms along the coast. Whites, Chinese, Japanese and Natives worked hard, played rough and shaped a unique West Coast culture.

In the 21st century, however, that way of life is on the wane. The advent of refrigerated packers put small-town canneries out of business. Then salmon stocks began to drop, and Ottawa started buying back fish boats to shrink the fleet.

High Boats is a celebration of--and an elegy for--that golden age. Through careful research, a priceless personal trove of photographs and sharp, earthy prose, Pat Wastell Norris wraps the history of coastal settlements around the lives of two veteran fishermen taking their boat for one last trip. When speaking through these characters, or guiding the reader around her childhood haunts in Alert Bay, Norris paints word pictures so vivid you can almost feel the gillnetters roll and smell the bull kelp.

Pat Wastell Norris was carried aboard her father's tugboat before she could walk, and has been addicted to salt air ever since. The author of Time and Tide: A History of Telegraph Cove, (Raincoast Chronicles 16) the bestselling High Seas, High Risk: The Story of the Sudburys and High Boats: A Century of Salmon Remembered, Norris now lives in Vancouver BC.