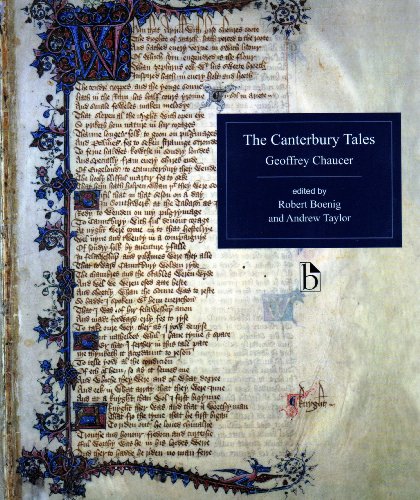 "This new Broadview edition by Robert Boenig and Andrew Taylor offers students an ideal means to read, study, and appreciate Chaucer's Canterbury Tales. The scholarly introduction discusses Chaucer's life, the formal features of his extraordinary tale collection, its historical reception, and modern critical approaches to the text. Based on the Ellesmere Manuscript, this attractive, readable edition features Chaucer's Middle English text, marginal glosses, explanatory footnotes, and illustrative facsimile pages. Especially helpful are the appended background documents, historical and literary, which provide key contexts for the interpretation of Chaucer's work. A useful bibliography concludes the volume. Highly recommended." - Ann W. Astell, University of Notre Dame "Britain's greatest medieval poem by its greatest non-dramatic poet: this new edition will be attractive to students, scholars, and general readers alike. The layout is inviting. Glosses in the margin and explanatory notes at the foot of the page insure easy access to all the necessary linguistic and historical expertise. Boenig and Taylor have done a wonderful job synthesizing the latest scholarship. The decision to concentrate on a single manuscript, the redoubtable Ellesmere, is a sound one. Facsimiles of individual leaves from that manuscript have been scattered throughout the volume to give us a real sense of what it would have been like to open The Canterbury Tales for the first time in the years immediately following Chaucer's death." - Larry Scanlon, Rutgers Universit

It would be impossible to overstate the influence of Geoffrey Chaucer's "The Canterbury Tales," A work with one metaphorical foot planted in the Florentine Renaissance literary tradition of Boccaccio's "Decameron" and the other in works ranging from John Bunyan, Voltaire, and Mark Twain to the popular entertainments of our own time, "The Canterbury Tales" stands astride the cultures of Great Britain and America, and much of Europe, like a benign colossus. Beyond its importance as a cultural touchstone and literary work of unvarnished genius, Chaucer's unfinished epic poem is also one of the most beloved works in the English language-and for good reason: It is lively, absorbing, perceptive, and outrageously funny-an undisputed classic that has held a special appeal for generations of readers. Chaucer has gathered twenty-nine of literature's most indelible archetypes-from the exalted Knight to the bawdy Wife to the besotted Miller to the humble Plowman-in a vivid group portrait that captures the full spectrum of late-medieval English society and both informs and expands our discourse on the human condition. Presented in these pages in a new unabridged translation by the esteemed poet, translator, and scholar Burton Raffel-whose translation of Beowulf has sold more than a million copies-this Modern Library edition also features an Introduction by the well-known and widely influential medievalist and author John Miles Foley that discusses Chaucer's work as well as to his life and times. Despite the brilliance of Geoffrey Chaucer's work, the continual evolution of our language has rendered his words unfamiliar to many of us. Burton Raffel's magnificent new translation bringsChaucer's poetry back to life, ensuring that none of the original's wit, wisdom, or humanity is lost to the modern reader.