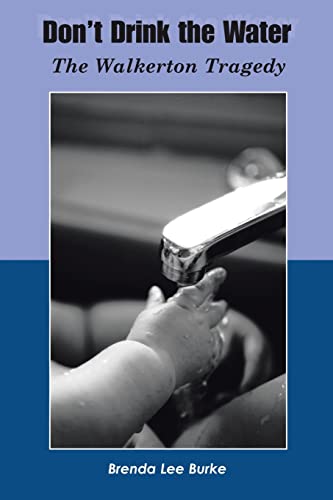 Long after the blinding flash of media attention dimmed, the town of Walkerton, Ontario was forced to deal with the aftermath of a crippling E. coli outbreak. Ranking with Eastern Ontario's great ice storm, the Walkerton water tragedy was the worst crisis of its kind in Canadian history. It resulted in death, illness, financial loss and paranoia.

Don't Drink the Water: The Walkerton Tragedy details the events of this disaster; sympathizes with victims and examines what went wrong.

Telling this incredible story with a creative journalistic approach, Brenda Lee Burke brings personal experience to her writing and demonstrates the strength of the Walkerton community as it pulled together in a time of great need.

Brenda Lee Burke is a journalist/editor who has written about water issues for various Ontario newspapers and magazines. After studying creative writing and journalism at York University and the University of Western Ontario, Burke settled near Walkerton to be near relatives, some of whom were directly affected by the water crisis. Burke is working on the movie version of Don't Drink the Water.

*A portion of this book's proceeds will go to the long-term recovery of the people of Walkerton.

2. Don't Drink the Water: The Walkerton Tragedy (Paperback or Softback)