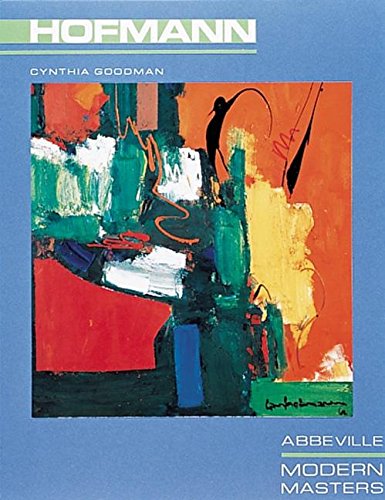 "Hoffman came to the United States in 1932. His style, influenced by the Fauves, Cubism, and Expressionism, was not fully abstract until the late 1930s. He had his own school of art in Munich, and his leadership of the New York School of Abstract Expressionism had much to do with his teaching in New York City and Provincetown. He is described as painting with gusto, but teaching with "coolness, precision, and objectivity." Vibrant color and rich texture are hallmarks of his work, illustrated here by many color plates. There are also interesting photographs of the middle-aged Hoffman. Goodman is currently organizing a Hofmann retrospective; she does a fair job of explaining his aesthetics to the layperson. For large general collections and art libraries." --Library Journal

As a young man in Paris, Hofmann participated in the artistic revolutions before World War I, than ran an influential art school in Germany between the wars. He came to America in 1930 and established schools in New York and Provincetown that has had a profound impact on the development of American art. By presenting his life's work, from the rare landscapes and portraits of his early years to the majestic late abstractions, this vibrantly colorful book establishes Hofmann's major contribution to the art of this century. About the Modern Masters series: With informative, enjoyable texts and over 100 illustrations -- approximately 48 in full color -- this innovative series offers a fresh look at the most creative and influential artists of the postwar era. The authors are highly respected art historians and critics chosen for their ability to think clearly and write well. Each handsomely designed volume presents a thorough survey of the artist's life and work, as well as statements by the artist, an illustrated chapter on technique, a chronology, lists of exhibitions and public collections, an annotated bibliography, and an index. Every art lover, from the casual museumgoer to the serious student, teacher, critic, or curator, will be eager to collect these Modern Masters. And with such a low price, they can afford to collect them all.