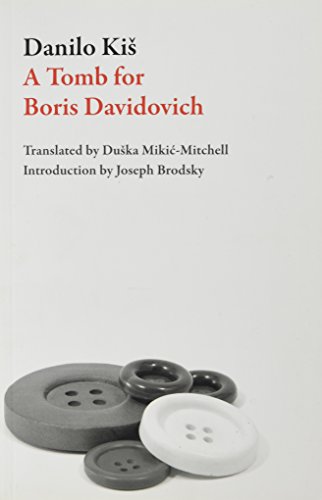 In Kis's case . . . it is the consistent quality of the local prose that counts. It is how, sentence by sentence, the song is built, and immeasurable meanings meant. It is the rich regalia of his rhetoric that leads us to acknowledge his authority. On his page, trappings are not trappings, but sovereignty itself.

A Tomb for Boris Davidovich bears traces of Orwell's 1984 and Koestler's Darkness at Noon, but it has its own special flair.

Kis's book is a collection of sleek, semi-biographical stories that, like microscope slides, slice from large events one squirming sliver . . . Much here is cast-iron and memorable.

A portrait of a country and a people in turmoil, a portrait of how Communism both creates and devours its sons.

A stunning statement on political persecution.

Kis slices into the essence of revolutionary spirit.

An absolutely first-rate book, one of the best things I've ever seen on the whole experience of communism in Eastern Europe, but more than that, it's really a first-rate novel. --Irving Howe

A Tomb for Boris Davidovic bears traces of Orwell's 1984 and Koestler's Darkness at Noon, but it has its own special flair.

Composed of seven dark tales, A Tomb for Boris Davidovich presents variations on the theme of political and social self-destruction throughout Eastern Europe in the first half of the twentieth century. The characters in these stories are caught in a world of political hypocrisy, which ultimately leads to death, their common fate. Although the stories Kis tells are based on historical events, the beauty and precision of his prose elevates these ostensibly true stories into works of literary art that transcend the politics of their time.