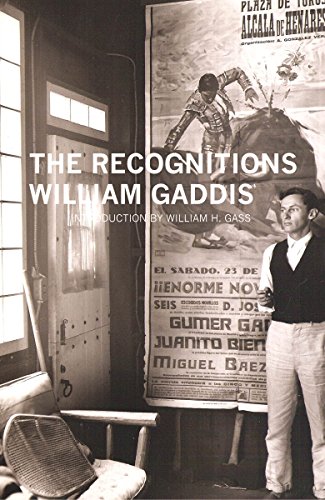 Críticas:
"The novel is like a huge landscape painting of modern New York, peopled with hundreds of doomed but energetic little figures, executed on wood panels by Brueghel or Bosch, and looking incongruously ancient beneath layers of yellowed lacquer. Even the blue skies in the book (the phrase "Another blue day" recurs as a despair-inducing leitmotiv) glow like oil-paint skies in an art museum..."--Jonathan Franzen, The New Yorker

"The Recognitions is always spoken of as the most overlooked important work of the last several literary generations... Through the famous obscurity of The Recognitions, Mr. Gaddis has become famous for not being famous enough."--Cynthia Ozick

"[The Recognitions] seems as relevant as ever. For who would dare say that we no longer live in a world in which people 'exchange forgeries of what the heart dare not surrender?' The problem of authenticity in all its forms is always with us, and in reading this extraordinary book we are constantly freed into recognitions -- re-cognitions -- of many aspects, of the problem, which have deteriorated into non-cognitions in our mass media age. William Gaddis detects forgery at all levels, but in doing so he has forged a classic."--Tony Tanner, The New York Times
Reseńa del editor:

The book Jonathan Franzen dubbed the "ur-text of postwar fiction" and the "first great cultural critique, which, even if Heller and Pynchon hadn't read it while composing Catch-22 and V, managed to anticipate the spirit of both" The Recognitions is a masterwork about art and forgery, and the increasingly thin line between the counterfeit and the fake. Gaddis anticipates by almost half a century the crisis of reality that we currently face, where the real and the virtual are combining in alarming ways, and the sources of legitimacy and power are often obscure to us.