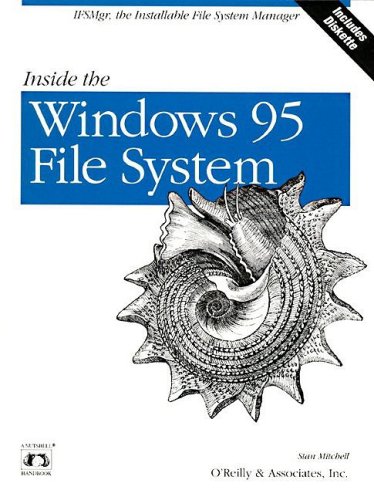 This book details the Windows 95 File System, depicting the role it plays in providing opportunities and challenges for developers. Over the course of the book, Stan Mitchell progressively strips away the layers of the Win95 File System, which reside in a component named Installable File System Manager or IFSMgr, providing the reader with information that is crucial for effective File System development. With the knowledge gained from this book, developers will have the ability to make crucial design decisions with the vast amount of new File System features.At present, there is a dearth of information about the Windows 95 File System. Microsoft has documented the Installable File System (IFS) in the Windows 95 device driver kit, yet it lacks example programs and background information on the File System's architecture or design. Stan's book, however, takes a "hands-on" approach and, where appropriate, demonstrates ideas with example code. The reader gets a view of the File System like a building that is going up, before the floors and walls are erected and the plumbing is in clear view.The book doesn't attempt to rebuild Windows 95 from the ground up, but it does trace through Windows 95 from the "Big Bang" to its quiescent state (Kernel idle). Armed with this background, the reader will approach examples of the Windows 95 operating system modes in the book, and examine how the File System is accessed from each of them.This book is vital to the large audience of people who don't write device drivers for a living, but who need to know about this new File System in Win95 that, appearances aside, is quite different from what the PC world has used for the last ten years. Includes a diskette containing MULTIMON, a general-purpose monitor developed by Stan Mitchell for examining Windows internals.

Stan Mitchell is a consulting software engineer in Silicon Valley. He specializes in driver and system level programming on the Wintel platform. Stan earned a Bachelor of Science degree from Wayne State University in 1970 and a Master of Science from University of Waterloo in 1976. He entered the microcomputer field in 1979. His early projects emphasized logic design of single-board microcomputers and micro-controllers. The most memorable project during this period was the design of a full-SCSI host adapter with 8048 firmware at Adaptec, Inc. After the introduction of the IBM-PC, Stan shifted his focus to MS-DOS system software and then to MS-Windows. His recent projects have included developing a NetBIOS layer over TCP/IP for NetManage and a Windows 95 file system monitor for Xerox/XSoft. Stan and his wife Maggie make Milpitas, CA, their home. In his spare time, he likes to romp with his dogs (Yanni & Munchkin), play a serious game of table tennis, and browse the shelves of nearby bookstores.

1. Inside the Windows 95 File System

Buchbeschreibung O'Reilly Media, Incorporated, 1511. Zustand: Good. 1st Edition. Shows some signs of wear, and may have some markings on the inside. Bestandsnummer des Verkäufers 8078301-6

Buchbeschreibung O'Reilly Media, 1997. Zustand: Good. A+ Customer service! Satisfaction Guaranteed! Book is in Used-Good condition. Pages and cover are clean and intact. Used items may not include supplementary materials such as CDs or access codes. May show signs of minor shelf wear and contain limited notes and highlighting. Bestandsnummer des Verkäufers 156592200X-2-4

4. Inside the Windows 95 File System

Buchbeschreibung O'Reilly Media, Incorporated. Paperback. Zustand: Good. A copy that has been read, but remains in clean condition. All pages are intact, and the cover is intact. The spine may show signs of wear. Pages can include limited notes and highlighting, and the copy can include previous owner inscriptions. At ThriftBooks, our motto is: Read More, Spend Less. Bestandsnummer des Verkäufers G156592200XI3N00

Buchbeschreibung O'Reilly Media, 1997. Paperback. Zustand: Good. Connecting readers with great books since 1972. Used books may not include companion materials, some shelf wear, may contain highlighting/notes, may not include cdrom or access codes. Customer service is our top priority!. Bestandsnummer des Verkäufers S_286076820