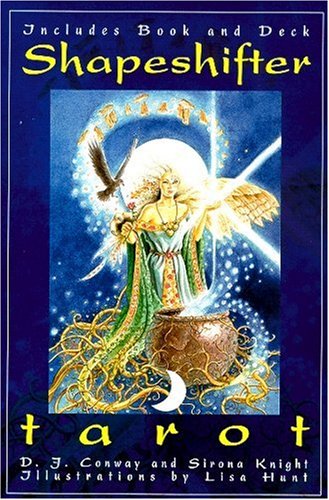 The Shapeshifter Tarot can be used as a bridge between humans, animals, and nature. The accompanying book gives full explanations on how to use the cards along with their full esoteric meaning, and mythological and magical roots.

A native of the Pacific Northwest, author D.J. Conway has studied the occult fields for over 35 years. Her quest for knowledge has covered every aspect of Paganism and Wicca to New Age and Eastern philosophies; plus history, the magical arts, philosophy, customs, mythologies and folklore. In 1998, she was voted Best Wiccan and New Age author by Silver Chalice, a Pagan magazine. Conway is the author of more than 20 nonfiction books including: Celtic Magic (Llewellyn), Dancing with Dragons (Llewellyn), Mystical Dragon Magic (Llewellyn), The Ancient Art of Faery Magick (10 Speed Press), and The Little Book of Candle Magic (10 Speed Press). She lives a rather quiet life, with most of her time spent researching and writing. For more than twenty years, Sirona Knight has been studying psychology, folklore, and religion with a personal interest in goddess tradition. She has traveled to Europe, Mexico, the Pacific Northwest, and Alaska on her quest for knowledge of the goddess. She is a published poet, writer, teacher, hypnotherapist, and lecturer and holds a master's degree in psychology and leisure studies from California State University. Knight is a Third Degree Craftmaster and High Priestess of the Celtic Gywddonic Druid Tradition. She has made radio and television appearances in Northern California, has been an active workshop leader for several years, and has created a series of guided imagery self-help tapes. She lives in the Sierra Foothills with her husband and their son, two dogs, and family of cats. Her writing room is situates next to an ancient Native American site, where she devotes her time and craft to enjoying life, moment by moment. Lisa is an internationally known tarot artist whose work includes The Shapeshifter Tarot, the bestselling Celtic Dragon Tarot (Llewellyn), and Fantastical Creatures Tarot (US Games 2007); voted a top 10 tarot deck for 2007 by Aeclectic Tarot. She is the creator of the award winning Animals Divine Tarot (Llewellyn 2005), earning her a 2006 COVR visionary award. Lisa is also the author of the fully illustrated meditation book Celestial Goddesses (Llewellyn 2001). Lisa loves to read and has an impressive collection of books. She has spent her life studying and sketching fairy tales, myths, legends and other fascinating subjects that have driven her muse. She also holds a M.A. in Interdisciplinary Studies with an emphasis on Jungian Psychology/Art & Drawing. Lisa lives with her family in Florida. You can learn more about Lisa and her work by visiting her website.