Secret Suppers: Rogue Chefs and Underground Restaurants in Warehouses, Townhouses, Open Fields, and Everywhere in Between 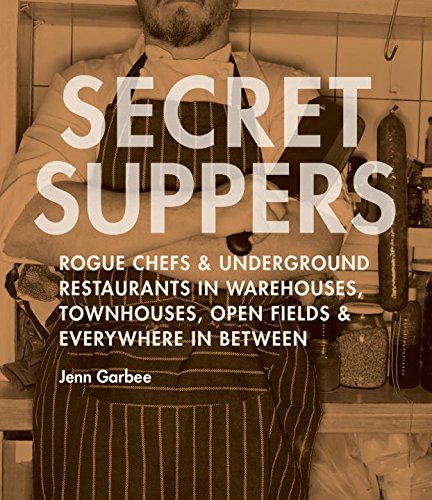 It’s happening in attics, garages, living rooms, parking lots and wine cellars across the nation – underground restaurant chefs are taking the food scene by storm, one dinner at a time. They’re throwing fabulous dinner parties at the drop of a hat for a hodge-podge of guests in offbeat, roving locations. They’re evading the cops, enticing the food-obsessed, and making headlines ("Restaurants on the Fringe, and Thriving"!). In short, they’re reinventing the dining experience. No wonder foodies are falling hard for the underground eating experience. And in Secret Suppers, LA Times journalist Jenn Garbee takes readers into this underground gourmet world as it’s taking place in Seattle, San Francisco, Washington, DC, Manhattan, Des Moines, Austin, and Sonoma County. Whether it’s steaks prepared in the parlor fireplace of a townhouse, or bacon-wrapped-bacon served on the deck of a charming little house in a sunny Seattle neighborhood, or a white-tablecloth affair set in an open field in Santa Barbara—chefs and food lovers are circumventing the restaurant altogether to cook what they want, to reinvent the serving ambiance whenever the whim strikes, and to attract the most adventurous diners. Sort of akin to speakeasies from an earlier era, some underground restaurants are the best-known secrets in town.

Jenn Garbee is a culinary instructor, chef-trained impromptu hostess, and freelance food writer whose work frequently appears in the Los Angeles Times. The former owner of the renowned online bakery Doughgirl, she lives in Los Angeles.

1. Secret Suppers: Rogue Chefs and Underground Restaurants in Warehouses, Townhouses, Open Fields, and Everywhere in Between

2. Secret Suppers: Rogue Chefs and Underground Restaurants in Warehouses, Townhouses, Open Fields, and Everywhere in Between

3. Secret Suppers: Rogue Chefs and Underground Restaurants in Warehouses, Townhouses, Open Fields, and Everywhere in Between