Verwandte Artikel zu BRANDY OUR MAN IN ACAPULCO: The Life and Times of Colonel...

BRANDY OUR MAN IN ACAPULCO: The Life and Times of Colonel Frank M.Brandstetter 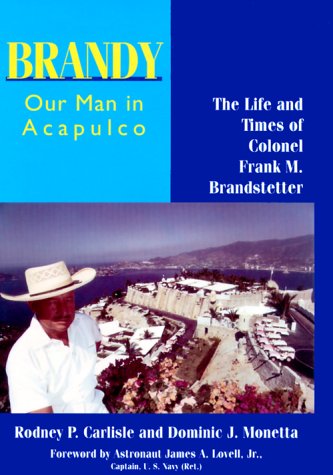 Hotelier, corporate executive, and U. S. Army intelligence officer, Frank M. Brandstetter played an active role in some of the dramatic episodes of the twentieth century. Born in Transylvania in 1912, Brandy came to the U.S. at the age of sixteen and worked at immigrant factory jobs until he stumbled into the restaurant and hotel business. Throughout the Depression years, he slowly worked his way up through the ranks until his enlistment in the army in 1940. Whether foiling a mass breakout plot by German POWs in England during the Second World War, leading a small party on a dangerous mission behind German lines to deliver a surrender demand from General Matthew Ridgway to Field Marshall Walther Model, parachuting into battle on D-Day, or confronting an angry Cuban mob intent on destroying the Havana Hilton, Brandstetter evoked the highest commendations from witnesses and supervisors. Ridgway himself praised Brandstetter as a "man of unimpeachable integrity, and personal physical and moral courage to the highest degree." These qualities Brandstetter took to the business world, turning a few undeveloped casitas in Acapulco into Las Brisas, the top resort in the world in 1972. This is the story of a man of action, a great patriot who dedicated his life to the service of his country.

Rodney P. Carlisle is professor of history at Rutgers University and a senior associate of History Associates, Inc. He is the author of several books of military and technological history. He and his wife live in Cherry Hill, New Jersey. Dominic J. Monetta is the founder and President of Resource Alternatives, Inc., a Washington, D. C.-based firm. He holds degrees from Manhattan College, George Washington University and a doctorate from the University of Southern California. He and his wife live in Washington, D.C

1. Brandy, Our Man in Acapulco: The Life and Times of Colonel Frank M. Brandstetter

2. Brandy, Our Man in Acapulco: The Life and Times of Colonel Frank M. Brandstetter