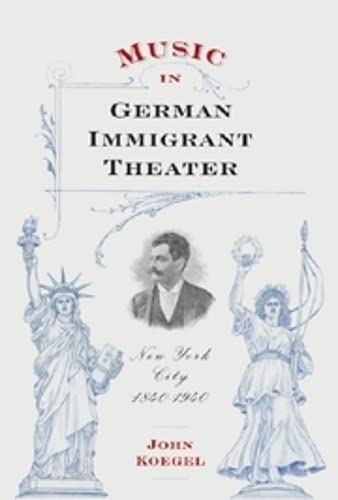 [M]agnificent and substantial . . . reveals long-forgotten legacies of shows, theaters, impresarios, composers, conductors, and performers. . . . The prose is lively, and many well-produced illustrations [including portraits, production photos, images of theaters, and sheet-music covers] add to the book's charm. . . . A twenty-track CD made expressly for the book allows the reader to hear gems from the repertory described in the prose. . . . Will be of interest to musicologists, theater, cultural, and immigrant historians, . . . German-studies scholars [and] a broader readership. AMERICAN MUSIC [William K. Kearns]

A stunning model of empirical research. . . . Its wealth of detail will offer scholars an invaluable resource for many years to come. MUSIC LIBRARY ASSOCIATION NOTES [Nancy Newman]

Broadly conceived, superbly researched, and elegantly written. . . . Beautifully produced, with over ninety illustrations. . . . The fundamental explication of a particularly long-lasting and influential tradition in our theatrical history. JOURNAL OF THE SOCIETY FOR AMERICAN MUSIC [Stephen Ledbetter]

Thanks to John Koegel's magnificent and substantial tome, long-overdue light is shed on . . . long-forgotten legacies of shows, theaters, impresarios, composers, conductors, and performers. . . . The prose is lively, and many well-produced illustrations . . . add to the book's charm. . . . [The CD] allows the reader to hear gems from the repertory described in the prose. . .AMERICAN MUSIC [William A. Everett]

Deep-delving. . . . Readable and entertaining. . . . A tour guide down a forgotten byway of the American immigrant experience, where life, at least sometimes, really was a cabaret. OPERA NEWS [John W. Freeman]

From the foreword: Koegel's palette is rich, his canvas, huge: the reader will see both the forest and its trees. Peter Conolly-Smith, Queens College, City University of New York

Koegel's book, with its numerous illustrations, takes its place in the pantheon of basic literature about the wondrous history of New York theatre. Miles Kreuger, president, The Institute of the American Musical

Packed with information. . . . The research that has gone into this volume is formidable. . . . Lively and elegant excerpts from these musical plays that are featured on a CD accompanying this volume [make one] wish that such works . . . still had a stage life. JOURNAL OF MUSICOLOGICAL RESEARCH [Simon Williams]

Nineteenth-century New York was, after Berlin and Vienna, the third largest German-populated city in the world. German-language musical plays and light operas held an important niche in the lives of German immigrants and their families. John Koegel's Music in German Immigrant Theater: New York City, 1840-1940, tells, for the first time, the engrossing story of these theater works, and the many musical numbers from them that became popular as separate songs.
Koegel documents performances, in German, of plays by Shakespeare and Goethe and operas by Offenbach, Verdi, and Johann Strauss. And he draws long-needed attention to German-American musical comedies written, beginning in the 1890s, by ethnic parodist Adolf Philipp. As their titles suggest -- Der Corner Grocer aus der Avenue A and Der Pawnbroker von der Eastside -- these musicals related directly to the daily experiences of the immigrant population.
Music in German Immigrant Theater is enriched by copious photographs, sheet-music title pages, and musical examples, as well as numerous sets of song lyrics -- some uproarious, others touching -- in German and in English translation. The accompanying CD includes recordings of many of the songs discussed in the book.

John Koegel is Professor of Musicology at California State University, Fullerton. WINNER - 2009 ForeWord Reviews' Book of the Year Award, music category. This book is also included in the AAUP's 2010 University Press Books Selected for Public and Secondary School Libraries along with a number of other URP books.