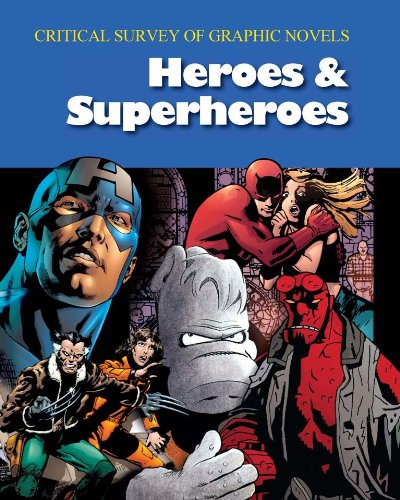 130 essays covering graphic novels and core comics series that form today's canon for academic coursework and library collections, with a focus on the hero/superhero genre. A ""first"" in the field, this brand new Critical Survey series focuses on all aspects of the graphic novels genre, aiming to establish it as an important academic discipline and research topic in libraries. Designed for academic institutions, high schools, and public libraries, the series provides unique insight into the stories and themes expressed in historic and current landscape of the graphic novel medium. Scope & Coverage The first title in this series, Critical Survey of Graphic Novels: Heroes and Superheroes, provides in-depth insight into over 130 of the most popular and studied graphic novels. Researchers will be familiar with the characters and stories included in this collection, but will gain a deeper new understanding, as the literary nature of the stories is presented in critical format by leading writers in the field of study. Essays look beyond the ""pop culture"" aspects of the medium to show the wide range of literary themes and artistic styles used to convey beliefs and conflicts, some harking back to ancient times. Today's graphic novels expose the vulnerabilities and character flaws that previous comic book stories glossed over or never covered. The impact of death becomes real, as popular heroes are killed, leaving an impact on the remaining characters. The theme of anti-hero runs deep as characters dismiss morality and engage in situations that are not heroic in nature. These concepts challenge the researcher to see beyond the panels of a comic book, showing readers how the themes of ancient literary tradition are still alive in the literature of graphic novels.

The first set in a series of Critical Surveys that focus exclusively on Graphic Novels, Heroes and Superheroes discusses 130 of the most popular graphic novels that feature such iconic heroes as Batman, Superman, Daredevil, Thor, X-Men and Buffy the Vampire Slayer. Plus, complimentary online access is provided through Salem Literature.