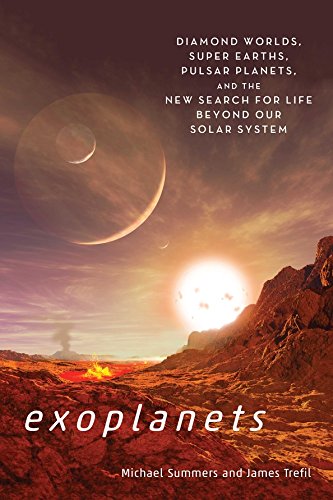 BOOKLIST, Starred Review
The existence of planets outside Earth's solar system was long assumed, and recent technologies, including improved telescopes and research satellites, have not only confirmed their existence but revealed all kinds of surprises. The first verified exoplanet, for instance, was orbiting "the wrong kind of star," a pulsar, or what was left after a supernova that was supposed to blast to smithereens anything even close to resembling a planet. Meanwhile, the statuses of solar system objects besides the recognized planets were changing as water, indispensable for Earth-like life, was detected as superficial ice and subsurface oceans on some moons of Jupiter, Saturn, and Neptune as well as on big bodies in the Kuiper Belt, such as the
demoted planet Pluto, which thereby regained its title. Astonishment continued as huge, rocky "Super Earths," inexplicably light planets, pure-carbon diamond planets, planets circling more than one star, starhugging hot planets, and rogue planets unconnected to stars were detected. These revelations, how they were made, imaginative voyages to five un-Earthly types of planet, and their implications for life and intelligence elsewhere than on Earth are concisely illuminated by astrophysicists Summers and Trefil in this marvelously fascinating and wonderfully accessible illustrated book. -- Ray Olson

PUBLISHERS WEEKLY
Readers tour several bizarre worlds in this slim read, as Summers and Trefil, professors of physics at George Mason University, show how "defining a 'planet' has been made significantly more difficult" in the exoplanet age. Astronomical investigations outside our celestial backyard are ripe with paradigm shifts because scientists suffered "the curse of the single example" our solar system and carbon-based life. Detailed photos and illustrations aid "visits" to unusual worlds, including 55 Cancri e, where volcanoes spew liquid diamond; Kepler 186f, with its vast lagoons and black flora that absorb "what energy they can from the faint sun"; and a rogue planet wandering dark space, where any life "must see in the infrared" and be warmed by the planet's core. The authors temper runaway imaginations with scientific uncertainties about each location, and they reexamine the Drake equation--used in the search for extraterrestrial life--in light of our current understanding of exosystem frequency and dynamics. Summers and Trefil write confidently and straightforwardly for lay readers, who will long ponder what planets circle other suns and the peculiar possibilities of life beyond our blue marble. Illus. KIRKUS REVIEW
A comprehensive introduction to the thousands of newly discovered planets beyond our solar system, which are beautiful and mind-bending in their diversity--and those are just the ones we know of.
Though astronomers had long predicted that there were other solar systems out there, only in the past decade has satellite telescope technology been able to confirm the existence of an enormous number of exoplanets, "planets outside our solar system. Even more significant than their abundance is their diversity, and even more astonishing than their diversity is, in some cases, their very existence--many of these worlds defy what scientists thought they knew about what was possible about how planets form and behave. Planetary scientist Summers (Physics and Astronomy/George Mason Univ.), who has been a member of multiple NASA mission teams, and Trefil (Physics/George Mason Univ.; Space Atlas: Mapping the Universe and Beyond, 2016, etc.) take readers on an exhilarating tour of the universe as we now know it. In a series of chapters that detail a variety of recently detected planets, the authors provide both a history of exoplanet discovery and a look toward the future of the field (which just may bear fruit in the search for extraterrestrial intelligence). "If there really are rogue planets floating around just outside the solar systems," they write, then perhaps "multigenerational starships...won't be needed to reach them." These otherworldly planets are dizzying in scope and are a wonderful feast for the imagination, even as the authors back up their imagery with the latest research findings. Also included are a number of photographs and illustrations that provide a welcome visual accompaniment to the lay-friendly text.
Space enthusiasts of all ages will enjoy this exploration into the farthest reaches of the universe and the cutting edge of astronomical research. CHOICE
Summers and Trefil (both, George Mason Univ.) have written a short, entertaining book about the huge variety of extrasolar planetary types, many of which were not even dreamt of a decade ago. The authors explore characteristics of some types discovered and extrapolated, such as worlds covered in ice and water, worlds with volcanoes that erupt diamonds, and some not yet seen, such as rogues ejected from planetary systems during formation to wander the galaxy without a star. The authors devote the most important part of the book to two questions: Is there life elsewhere and can we recognize it? If so, is there intelligent life? They posit that the first question may be answered in the affirmative soon, as new telescopes begin the necessary observations. Yet the question about intelligent life may never be answered. The book has been written to avoid the obsolescence that rapid progress can bring about in this field.
Reseþa del editor:

The past few years have seen an incredible explosion in our knowledge of the universe. Since its 2009 launch, the Kepler satellite has discovered more than two thousand exoplanets, or planets outside our solar system. More exoplanets are being discovered all the time, and even more remarkable than the sheer number of exoplanets is their variety. In Exoplanets, astronomer Michael Summers and physicist James Trefil explore these remarkable recent discoveries: planets revolving around pulsars, planets made of diamond, planets that are mostly water, and numerous rogue planets wandering through the emptiness of space. This captivating book reveals the latest discoveries and argues that the incredible richness and complexity we are finding necessitates a change in our questions and mental paradigms. In short, we have to change how we think about the universe and our place in it, because it is stranger and more interesting than we could have imagined.