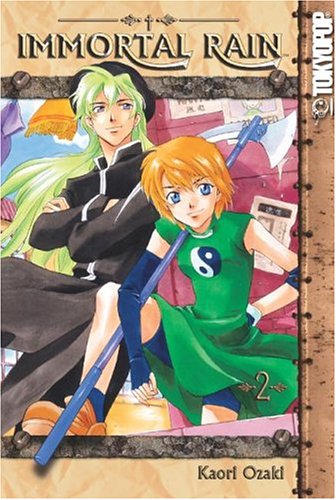 The train Machika and Rain are on is attacked by Eury and his siblings, the Desert Pirates! Eury was sent by Sharem on behalf of the strange company they work for involved in research on the angels. Rain and Machika manage a getaway, but Rain forgot Freya's violin. In an attempt to prove to Rain that she's strong and doesn't need to be left behind, Machika goes back after the violin, facing Eury on her own. Rain goes after Machika, saving her and defeating Eury and his siblings, refusing to be taken by Eury. As Rain walks off, Eury asks what Machika is to Rain, to which Rain responds "my Reaper." Later, Rain and Machika hitch a ride on a prison airship as prisoners. Machika meets a woman who knew Rain when she was Machika's age that warns her that Rain will leave her eventually, but Machika is growing more attached to Rain. Rain also opens up a little to Machika, telling her that Rain waiting for the rebirth of the man who made him immortal, Yuca Collabell. At the same time, Sharem and the president of the company, Ishmael, await the birth of their second child, their first, Iisu (Ys?) having been killed in an accident (by his father) years earlier. Sharem is no longer able to have children, so the child is being carried by her sister, Tseeda(?). But something is strange about the unborn baby. Meanwhile, Sharem's assistant Jilleena, frustrated over losing to Machika and Ayla in Volume 1, leads a team of other kids without permission to the flying prison to kill Machika and Rain. Just as Machika and Rain are about to escape, Machika is shot by Jilleena and falls off the ship. Rain dives after her as the volume closes.