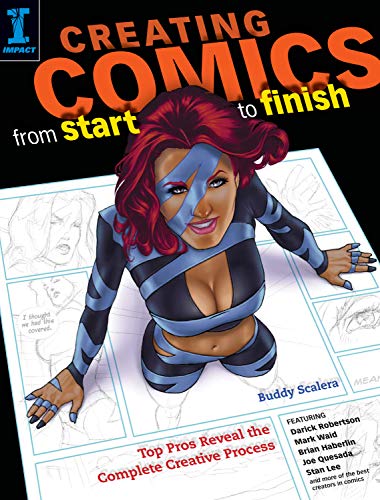 You Can Work Professionally in Comics!

Jump-start your comic book career! Creating Comics From Start to Finish tells you everything about how today's mainstream comic books are produced and published. Top working professionals detail how comics are created from concept to completion.

Dig deep into every step of the process including writing, editing, penciling, inking, coloring, lettering and even publishing. Working professionals talk candidly about breaking into (and staying in) this exciting industry.

Interviews and advice from:

Buddy Scalera is a comic and graphic novel writer, and he was the creator and editor of Wizard Entertainment WizardWorld.com and WizardSchool.com websites. He is also known for his photography as the author of the bestselling Comic Artist Photo Reference series (IMPACT Books) and CD-ROM series Visual Reference for Comic Artists. He also self-publishes with After Hours Press. Scalera has hosted sessions on creating comics at WizardSchool.com online and Wizard School workshops at WizardWorld conventions; and he also wrote and hosted a cable TV show explaining the comic hobby, for over four years. Visit his website www.buddlyscalera.com.