Lucretius: On the Nature of Things: (Forgotten Books) 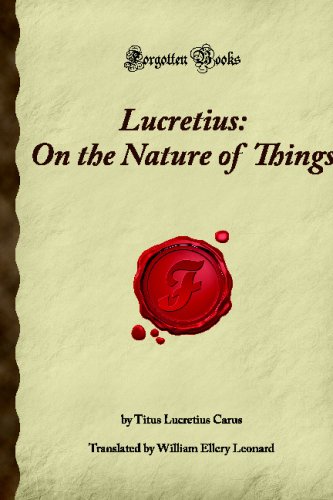 "On the Nature of Things (Latin: De rerum natura) is a first century BC epic poem by the Roman poet and philosopher Lucretius that grandly proclaims the reality of man's role in a universe without a god to help him along. It is a statement of personal responsibility in a world in which everyone is driven by hungers and passions with which they were born and do not understand." (Quote from wikipedia.org)

Publisher's Preface; Book I.; Proem; Substance Is Eternal; The Void; Nothing Exists Per Se Except Atoms And The Void; Character Of The Atoms; Confutation Of Other Philosophers; The Infinity Of The Universe; Book ii.; Proem; Atomic Motions; Atomic Forms And Their Combinations; Absence Of Secondary Qualities; Infinite Worlds; Book iii.; Proem; Nature And Composition Of The Mind; The Soul Is Mortal; Folly Of The Fear Of Death; Book iv.; Proem; Existence And Character Of The Images; The Senses And Mental Pictures; Some vital Functions; The Passion Of Love; Book V.; Proem; Argument Of The Book And New Proem Against Teleological Concept; The World Is Not Eternal; Formation Of The World And Astronomical Questions; Origins Of Vegetable And Animal Life; Origins And Savage Period Of Mankind; Beginnings Of Civilization; Book vi.; Proem; Great Meteorological Phenomena, Etc; Extraordinary And Paradoxical Telluric Phenomena; The Plague Athens

Forgotten Books is a publisher of historical writings, such as: Philosophy, Classics, Science, Religion, Esoteric and Mythology. www.forgottenbooks.org

Forgotten Books is about sharing information, not about making money. All books are priced at wholesale prices. We are also the only publisher we know of to print in large sans-serif font, which is proven to make the text easier to read and put less strain on your eyes.

"Titus Lucretius Carus (ca. 99 BC- ca. 55 BC) was a Roman poet and philosopher. His only known work is the epic philosophical poem De Rerum Natura, On the Nature of Things.

Very little is known about Lucretius' life. One source of information (generally considered unreliable) is St. Jerome, who mentions Lucretius in the Chronica Eusebii. Here we find the following notice: "Titus Lucretius the poet is born. Later he was driven mad by a love potion, and when, during the intervals of his insanity, he had written a number of books, which were later emended by Cicero, he killed himself by his own hand in the 44th year of his life." In most manuscripts this notice is entered under the year 94 BC, but in others under 93 or 96. This gives us the following alternative dates for Lucretius' life and death: 96-53/52, 94-51/50, and 93-50/49.

In the Oxford World's Classics edition of "On the Nature of the Universe," the editors, Don and Peta Fowler, note that the story told by St. Jerome is unlikely. The Fowlers state that Lucretius was most likely an aristocrat and his poem "shows familiarity with the luxurious life-style of great houses in Rome."" (Quote from wikipedia.org)

1. Lucretius: On the Nature of Things: (Forgotten Books)

2. Lucretius: On the Nature of Things: (Forgotten Books)