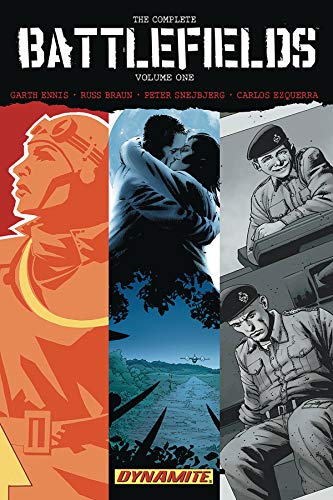 Three tales of lost innocence, tragedy and suspense set during the Second World War, by writer Garth Ennis and artists Russ Braun, Peter Snejbjerg and Carlos Ezquerra. As the German army smashes deep into Soviet Russia and the defenders of the Motherland retreat in disarray, a new bomber squadron arrives at a Russian forward airbase. Its crews will risk fiery death on lethal night missions against the invader - but for these pilots, the consequences of capture will be even worse. For the crews of the 599th Night Bomber Regiment are women. In the deadly skies of the Eastern front, they will become a legend- known, to friend and foe alike, as The Night Witches. 1942: in the tropical splendor of the South China Sea, as war spreads across the far east, a young woman finds herself in paradise - and then in hell. Nurse Carrie Sutton is caught up in the Japanese invasion of Singapore, suffering horrors beyond her worst imaginings. Now she attempts to start her life anew, buoyed up by a growing friendship with a young pilot - and, incredibly, a chance for revenge. But even victory can be a hollow prize, as Carrie discovers to her cost in Dear Billy. After D-Day came the battle for Normandy, when untried Allied soldiers met the seasoned veterans of the German Army. As Panzer units and SS troops turn the French countryside into a killing ground, a lone British tank crew struggles to rejoin their squadron. Lost behind enemy lines, their only hope lies in their veteran commander, Corporal Stiles - but can even this wily old trooper lead The Tankies to victory against Germany's fearsome Tiger tank? This massive, 248-page trade paperback collects the first three Battlefields story arcs. Nine issues in all! Collects The Night Witches, Dear Billy, and Tankies, complete with bonus material such as sketches and commentary from Ennis, along with a cover gallery by series cover artists John Cassaday and Garry Leach!