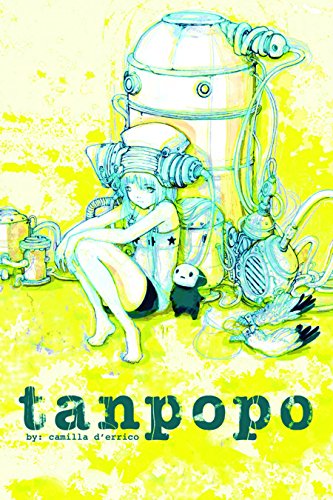 Celebrated creator Camilla d'Errico delivers a stunning visual journey exploring emotion, self-discovery/innocence and what it means to be human. TANPOPO is superhumanly intelligent and inhumanly emotionless. Attached to a mysterious machine and ruled by her vast knowledge, one day her heart rises up to struggle against her ruling mind. Torn and confused, she now seeks humanity, longing to feel what other humans feel. Each chapter of TANPOPO is inspired by a classic piece of literature or poetry, woven into its own epic story, and contained in this beautiful hardcover edition.

Camilla d'Errico has been making waves in the fine art and comic industries with her manga-influenced style. Ever the prolific artist, d'Errico is an urban contemporary painter, illustrator, designer, character creator, and comic artist residing in Vancouver, Canada. Nominated for both Eisner and Joe Shuster Awards, she has worked with Random House, Dark Horse Comics, Image Comics, and Tokyopop. Her creator-owned properties include the graphic novel BURN and SKY PIRATES OF NEO TERRA. TANPOPO, d'Errico's passion project, has been embraced by fans and independent comics collectors for its highly original combination of classic poetry and literature blended with her unique "West Meets East" drawing style. She has collaborated with Neil Gaiman, Sanrio, Disney and Mattel. d'Errico has distinguished herself through her ability to seamlessly weave manga and western comic art, creating a unique style that bridges cultural and geographical boundaries, while remaining totally relevant to today's varied audience.

Buchbeschreibung Boom! Studios, United States, 2012. Hardback. Zustand: New. Camilla D'Errico (illustrator). Language: English. Brand new Book. Tanpopo is superhumanly intelligent and inhumanly emotionless; she is ruled by her mind and vast knowledge. Something inside of her suddenly breaks and her heart rises up to struggle against the ruling mind. Torn and confused, she now seeks her humanity, longing to feel what humans feel. Kuro, or "Poodle", senses her distress. He promises Tanpopo that she will experience the full range of human emotions, of which love and happiness are the coveted prizes. Alas, such a rich reward cannot come without its price: Kuro is The Devil in disguise and he is after Tanpopo's Soul. Will her quest for love set her free.or will it shackle her for eternity? Each chapter of Tanpopo is inspired by a classic piece of literature. This premiere volume explores Goethe's Faust, Samuel Taylor Coleridge's The Rime of the Ancient Mariner, and the Chinese author P'u Sung-Ling's Strange Stories form a Chinese Studio. Bestandsnummer des Verkäufers AA89781608862542