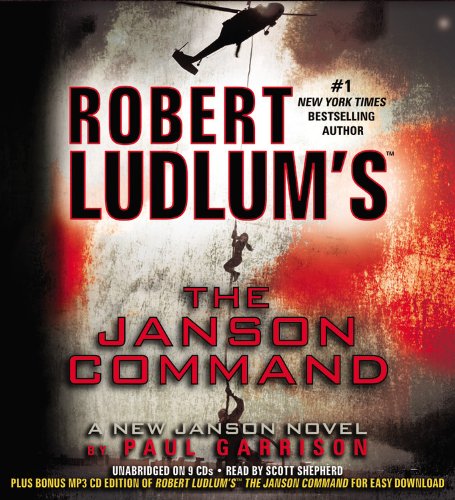 Paul Janson, a character first featured in Robert Ludlum's bestselling novel The Janson Directive, has a new goal: save the world, one operative, one mission, one redemption at a time.
Reformed from his days of covert-operations, Paul Janson has set a new mission for himself. Working in partnership with champion sharpshooter Jessica Kincaid, he rehabilitates disenchanted agents and helps them create new lives outside of the violent intelligence sector. These former operatives then form a network of support for Janson when it comes to his other job--Janson also takes on independent assignments. For a fee, he'll use his skills to resolve international crises. But only those actions that he believes contribute to the greater good of all.
Whether he's rescuing an American doctor from Somalian pirates, attacking militant thugs intent on murdering a West African public servant agitating for human rights, or hunting the money-lenders who capitalize on barbaric civil war, Janson stays honest with three simple rules: 1) No torture. 2) No civilian casualties. 3) No killing anyone who doesn't try to kill them. Yet with his commitment to doing what is right--while facing canny intelligence operatives, ruthless warlords, deep sea marauders, or brutal dictators--Janson finds that his most difficult task is figuring out if he's fighting for the good side.

ROBERT LUDLUM was the author of twenty-one novels, each one a New York Times bestseller. There are more than 210 million of his books in print, and they have been translated into thirty-two languages. He is the author of The Scarlatti Inheritance, The Chancellor Manuscript, and the Jason Bourne series--The Bourne Identity, The Bourne Supremacy, and The Bourne Ultimatum--among others. Mr. Ludlum passed away in March, 2001. http://www.ludlumbooks.com/

PAUL GARRISON was born in New York and currently lives in Connecticut. He has spent a lot of time on boats, and had published five thrillers, mostly sea-oriented: Fire And Ice; Red Sky At Morning; Buried At Sea; Sea Hunter; The Ripple Effect before writing the first of the new Janson novels.

Buchbeschreibung Grand Central Publishing, 2012. Audio CD. Zustand: Good. Book shows common (average) signs of wear and use. Binding is still tight. Covers are intact but may be repaired. We have 500,000 books to choose from -- Ship within 24 hours -- Satisfaction Guaranteed!. Bestandsnummer des Verkäufers mon0000636116

Buchbeschreibung Grand Central Publishing, 2012. MP3_CD. Zustand: Good. MP3 CD in MP3 format. You will receive an MP3 CD, withdrawn from the library collection, that CONTAINS THE ENTIRE AUDIO PRODUCTION! So versatile. Listen directly. Download on your device. We will polish the MP3 CD for you for a smooth sounding performance. Bestandsnummer des Verkäufers LUVLYAUTMN16328