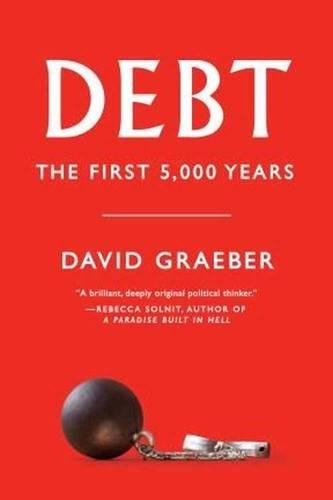 'One of the year s most influential books.' - Paul Mason, The Guardian

'The book is more readable and entertaining than I can indicate... It is a meditation on debt, tribute, gifts, religion and the false history of money. Graeber is a scholarly researcher, an activist and a public intellectual. His field is the whole history of social and economic transactions.' - Peter Carey, The Observer

'The most important theory book I've read this year, an essential take on the current crisis by an anarchist anthropologist who combines credentials with readability.' - Laurie Penny's Book of 2012 in the New Statesman

'Brilliant, unexpectedly funny, and provides many bracing perspectives on the subject.' - A 2012 Book of the Year in The Spectator

'An alternate history of the rise of money and markets, a sprawling, erudite, provocative work.' - Bloomberg Businessweek

'Savage capitalism is back and it will not tame itself.' David Graeber writes about the problems of capitalism in - --The Guardian
Reseńa del editor:
Now in paperback: David Graeber’s “fresh . . . fascinating . . . thought-provoking . . . and exceedingly timely” (Financial Times) history of debt

Here anthropologist David Graeber presents a stunning reversal of conventional wisdom: he shows that before there was money, there was debt. For more than 5,000 years, since the beginnings of the first agrarian empires, humans have used elaborate credit systems to buy and sell goods—that is, long before the invention of coins or cash. It is in this era, Graeber argues, that we also first encounter a society divided into debtors and creditors.

Graeber shows that arguments about debt and debt forgiveness have been at the center of political debates from Italy to China, as well as sparking innumerable insurrections. He also brilliantly demonstrates that the language of the ancient works of law and religion (words like “guilt,” “sin,” and “redemption”) derive in large part from ancient debates about debt, and shape even our most basic ideas of right and wrong. We are still fighting these battles today without knowing it.