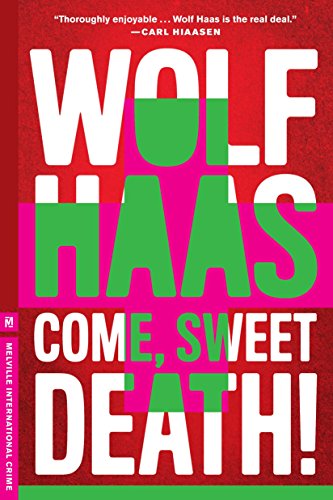 "One of the wittiest and most appealing novels of the summer."
--Globe and Mail (Canada)

"Simon Brenner, the hero of Wolf Haas's marvelous series of crime thrillers, is a wildly likable and original character--a delightful and unexpected hero to show up in this noble and enduring genre."
--Jonathan Demme, Oscar-winning director of The Silence of the Lambs "A must for crime fiction lovers with a sense of humor: In Simon Brenner, Wolf Haas has created a protagonist so real and believable that I sometimes wanted to tap him on the shoulder and point him in the right direction!"
--Andrey Kurkov, author of Death and the Penguin

"Brenner and God is one of the cleverest--and most thoroughly enjoyable--mysteries that I've read in a long time. Wolf Haas is the real deal, and his arrival on the American book scene is long overdue."
--Carl Hiaasen, author of Sick Puppy "A meticulously plotted, dark, and often very funny ride."
--The Millions "Brenner and God is a humdinger . . . a sockdollager of an action yarn, revealed via the smart-ass, self-effacing narrative voice that's a sort of trademark of author Wolf Haas."
--Austin Chronicle

"[A] superb translation of one of Austria's finest crime novels . . . Haas never loses the thread of investigation, even as he introduces off-beat characters and a very complex plot . . . This is the first of the Brenner novels in English. We can only hope for more, soon."
--Globe and Mail (Canada)

"Even as Haas darkens the mood of this sly and entertaining novel, he maintains its sardonically irreverent tone."
--Barnes & Noble Review "A pacey and gripping read."
--Euro Crime "A gleaming gem of a novel."
--Crimespree Magazine

"It's a novel that leaves you laughing even as you work to solve the mystery."
--Globe and Mail (Canada) "A brilliant book . . . Already among the greats of mystery fiction."
--Book Devil "The most original figure here is the narrator, who hovers above the action with matter-of-fact detachment, ever alert for moments when he can swoop down and set you straight about what's going on or change the subject entirely."
--Kirkus Reviews Praise for Resurrection "It's truly amazing to see Brenner finally put the pieces together . . . Add a narrator whose rapid-fire monologue piles additional layers of digression atop Brenner's own circumlocutions, and you have the shaggiest detective currently working the field."
--Kirkus Reviews "If you like the Coen brothers, you will adore Inspector Brenner."
--Globe and Mail (Canada) Rese˝a del editor:

In this winner of the German Thriller Prize, ex-cop Simon Brenner, as part of his never-ending quest to get as far away from being a cop as he can, takes a job as an ambulance driver in downtown Vienna.

It’s a hair-raising job, though, made more so by the tendency of the other EMTs to place bets on how many red lights they can run. Even worse, Brenner’s new employer has a problem: its major competitor is somehow listening in on radio communications and beating his unit to every pickup. Knowing his past on the force, Brenner’s boss asks him to act like a cop and investigate. Meanwhile, is it Brenner’s paranoia or are certain wealthy elderly patients who are essentially healthy dying more quickly than they should?

It isn’t long before Brenner’s life is in real danger, and once again it will take a certain amount of booze, pills, and bad behavior for our man to survive being a cop one more time.