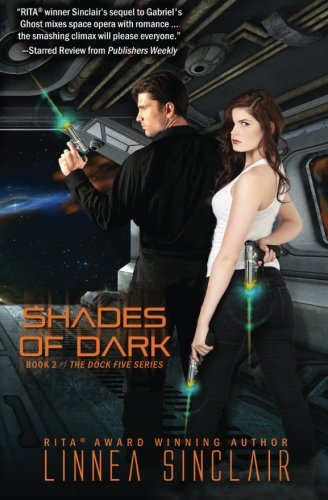 For two fugitive lovers, space has no haven, no mercy, no light-only... SHADES OF DARK. Court-martialed Imperial Fleet captain Chasidah Bergren is on the run with her fugitive lover, the telepathic mercenary Gabriel Sullivan. Rim-worlds and illegal deep-space outposts offer little safety. Corruption in the empire-expertly orchestrated by Sully's powerful cousin, Hayden Burke-is everywhere: among her crew, her friends. Even her family. Then a mysterious operative offers critical intel on Burke's plans. But Captain Del Regarth has plans of his own... Everyone has a price. Everyone can make a choice. But when Sully makes his, Chaz must choose between what Sully has become-and what her heart demands she must do.

Winner of the prestigious national book award, the RITA, author Linnea Sinclair is a name synonymous with high-action, emotionally intense, character-driven science fiction romance novels. Reviewers note that Sinclair's novels "have the wow-factor in spades." Her books have claimed spots in the Locus Top Ten and received starred reviews in Publishers Weekly. Romantic Times BOOKreviews magazine consistently gives Sinclair's books 4-1/2 stars (their highest rating). Starlog magazine calls Sinclair "one of the reigning queens of science fiction romance." She's the author of the exciting Dock Five Universe series that starts with Gabriel's Ghost. Other Sinclair novels include PEARL award winners Finders Keepers, Games of Command, and Hope's Folly (Dock Five book #3). Sinclair, a former news reporter and private investigator, resides in Florida with her husband, Robert Bernadino, and their thoroughly spoiled cats. Readers can find her perched on the third barstool from the left in her Intergalactic Bar and Grille at www.linneasinclair.com or on Facebook at https://www.facebook.com/pages/Linnea-Sinclair/75135631090.