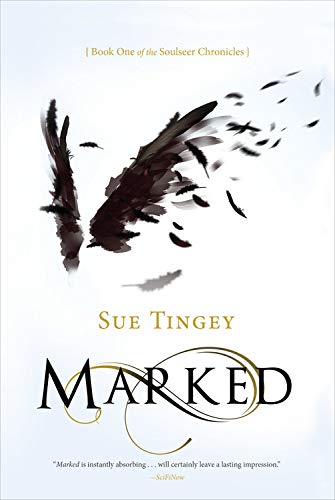 "I loved this book. The characters, the atmosphere, the banter, the romance, it all worked. Marked is a wonderful debut for Tingey."--A Fantastical Librarian

"This is the kind of story that sucks readers in very quickly and you end up completely losing track of time while you're reading. I cannot wait to see where it goes from here. I will definitely be picking up the next book in this series."--Endless Reading

In a world filled with charlatans, Lucinda "Lucky" de Salle's psychic ability has always made her an outcast, even as it has also made her a sought-after (if reluctant) investigator of paranormal phenomena. With no remaining family and very few friends, she has only one "person" she can rely on--Kayla, the ghost girl who has been her constant companion since she was born.
When Lucky is called in to investigate a spectral disturbance at the all-girls school she attended as a child, she isn't surprised. She herself had had a terrifying confrontation with the troubled spirits of two girls who died in the attic room. But when Lucky goes up to the attic, she discovers that the vicious little girls are the least of the problem--a demon has been released into this world, a creature of such malevolence that even the spirits of the two girls are afraid. When the demon demands that Kayla be handed over to him, Lucky realizes that this case will be like no other she has ever experienced.
For one thing, it seems that her chatty, snarky spirit companion is not what she has always seemed to be...