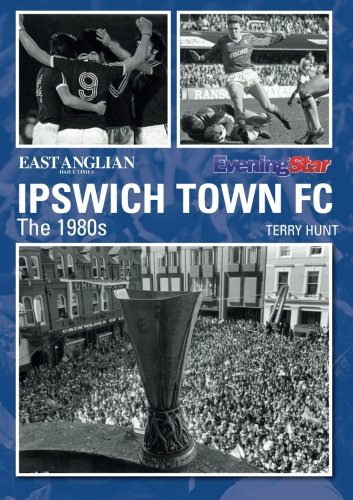 This is a must-have book of memories for both loyal fans and lovers of football history. You can take a trip back in time to a decade which saw Ipswich Town go from glory to heartbreak via the unrivalled picture archive of the "East Anglian Daily Times". The 1980s began with Ipswich winning the UEFA Cup in an unforgettable season which also saw them come agonisingly close to capturing the League Championship and the FA Cup. After that, though, it all went wrong horribly quickly. Bobby Robson left for the England job, star players drifted away, and within five years of the UEFA Cup triumph, the unthinkable happened - Town were relegated. The remainder of the 1980s saw Ipswich in the doldrums, struggling to make any real impact in Division Two, with dwindling and increasingly disgruntled crowds. Relive every high and low, triumph and disaster, through hundreds of evocative photographs. They tell the tale of a decade which had just about everything.

Terry Hunt, the editor of the East Anglian Daily Times newspaper since 1996, has been an Ipswich Town fan for more than 40 years. Brought up in the heart of Suffolk, Terry started attending games in 1968 In the four decades since, Terry - along with thousands of other Ipswich Town fans - has experienced a roller coaster ride with many fantastic highs and several awful lows. Away from football and work, Terry is married to Jane, and they have three children. Terry enjoys watching most sports as a spectator, he has completed two London Marathons (very slowly) and plays golf (very badly).